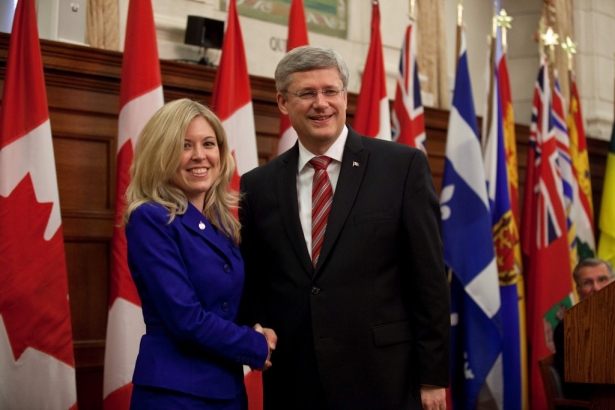 "It's a very interesting choice. It's hard to imagine positive steps on the environment being taken by anyone under the micromanaged Harper government given their abysmal record," commented ForestEthics campaigner Ben West, on whether having an environment minister from the north would help, given Canada's plans for Arctic oil and gas drilling and pipeline building.

"It's a positive step in terms of equity and opportunity for Indigenous people. But if Harper expect this to smooth over controversial projects like the Northern Gateway pipeline, I think he is in for a surprise," he said.
Some media commented that Kent often appeared that he was not interested in the environment, suggesting that "less is more" when it comes to environmetnal regulations at a meeting with oil sands producers last May.
Michelle Rempel, 33, the Conservative MP representing Calgary Centre-North has been named minister of state for western economic diversification: she's worked in the past as director of the University of Calgary's institutional programs division, in the technology commercialization division of the University of Manitoba and as a managerial consultant in Calgary.
She tweeted that she would work toward "creating the conditions for Western Canadian businesses to grow and prosper": more updates on what that will mean.

Shelly Glover for Saint Boniface in Manitoba took on James Moore's role as Heritage Minister, while Moore made the big move of the day to Industry Minister, replacing Christian Paradis.

Other big changes included former back-bencher and Canada's first resident Afghanistan ambassador Chris Alexander as the new Immigration Minister. Jason Kenney -- widely praised for his outreach in immigrant communities but criticized for his inaction on citizenship issues such as the Lost Canadians -- has become minister of a new portfolio,  employment and social development, which replaces human resources and skills development department.

Lisa Raitt has been named the new transport minister, while Candice Bergen has become the new minister of state for social development, while Steven Bleney replaced the unpopular Vic Toews as public safety minister. Towes has resigned and will not be moving to a new cabinet minister position.

Even in cases where people were not moved, such as natural resources Minister Joe Oliver and finance minister Jim Flaherty,  it spoke volumes about how the government will conduct business in upcoming months.

Mallick, Decrying Harper's Proroguing of Parliament, Says Prime Minister Wants to Make Canada a "Pale Watery Version of the US"