Deep pocket PR vs. artist Franke James: the fight's on

Do not talk about climate change, it's against government policy, James' ads in Hill Times say. 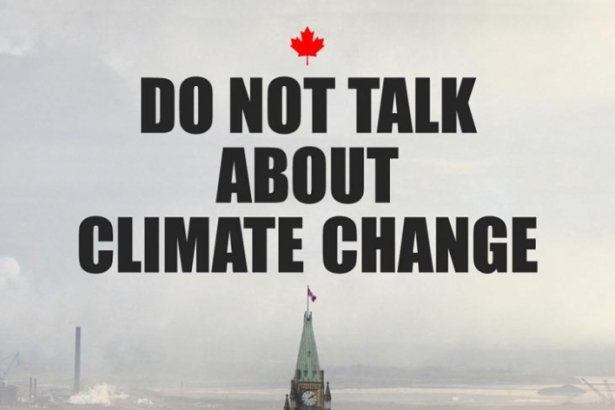 Last week, Stephen Harper jetted down to New York to convince a room full of businessmen that Keystone XL was the wave of the future.

“I don’t have to tell you there are probably reasons beyond just emissions why you would probably want to have your oil from Canada rather than from Venezuela,” Harper joked, apparently to a round of laughter from the crowd.

The Harper government coupled this visit with a PR campaign featuring greenwashed ads on news sites like Politico and the Washington Post, and bus shelters around Washington, DC.

Meanwhile in BC, a “concerned citizens group” named British Columbians
for International Prosperity (BC4IP), headed by oil sands management consultant and former BP employee Bruce Lounds, has launched several YouTube videos proclaiming that we can have it all – economic prosperity and environmental safety – simply by trusting tankers and pipelines and the well-meaning companies who manufacture them.

Natural Resources Canada has $16.5 million allocated for their advertising campaigns this year; that's quite a bit of dosh to spend on wooden acting, PR, and the juxtaposition of Tom Thompson trees and tankers.

In contrast, independent artist Franke James's Indiegogo campaign is asking pledgers to contribute a total of $5,000 so that she can poster Ottawa with her unique brand of illustrated essays – criticizing everything from the Harper approach to environmental regulation, to their strict communications controls.

“Do not talk about Climate Change,”  reads James' current Hill Times banner ad, for example, “it is against government policy.”

Government retribution for speaking out against climate change is something that James has experienced personally.