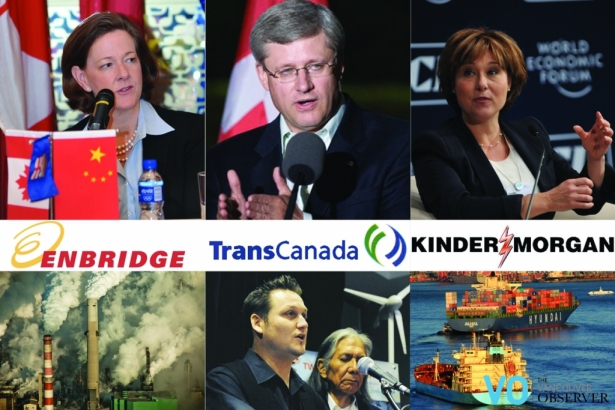 There has yet to be a comprehensive, concise, evidence-based guide in the public interest. This was the genesis for an e-book series about about Northern Gateway, Kinder Morgan, Keystone XL and the future of Canadian oil sands development. Graphic by Beth Hong for The Vancouver Observer.

While BC Premier Christy Clark exchanged heated barbs with Alberta premier Alison Redford about who should get what share of the Enbridge Northern Gateway pipeline revenues this week, the window of opportunity for Canadians to get informed and have a say is steadily closing.

At the beginning of July, The Vancouver Observer launched a crowdsourced Indiegogo fundraising campaign to push an e-book about oil sands development in Canada through its final stages of editing and design. In just under a month, the campaign has raised over $8,500 thanks to donations from people in British Columbia and Canada.

Publisher and editor-in-chief Linda Solomon said that the purpose of this book is to inform, not preach. The Vancouver Observer will distribute free copies of the e-book to city halls, BC government offices, and federal governments.

"This is the biggest issue BC faces, now and for years to come," Solomon said. "It's not just about the environment -- it's ultimately about the long-term social, economic, and cultural impact of using this resource, and what realistic alternatives are available."

The big picture issue: the future of oil sands development in Canada

An Ipsos Reid poll from January this year showed that 55 per cent of people in BC are “not familiar” or "not familiar at all" with Northern Gateway. This is worrisome, given that Enbridge has poured $5 million into an advertising campaign emphasizing a limited, selective picture.

Politicians, corporate executives, and special interest groups all insist their interests align with those of their constituents, shareholders, and Canadians.

Time running out to get informed, have a say in the fate of Enbridge Northern Gateway

The Enbridge Joint Review Panel is scheduled to hold public hearings in Vancouver between January 14 - 18, 2013, with possible additional hearings on January 31, February 1 and 4 - 8 (for full list of hearing dates, click here). Members of the public who wished to speak and submit evidence at the hearings have to be registered as intervenors. Although the deadline has passed to register, there remains a more powerful, direct option: giving your informed opinion to MPs, MLAs, and city hall councillors who are paid to serve the public interest.

However, getting fully informed is a daunting task with over 31 million results for 'Northern Gateway' on Google, and an endless stream of transient headlines.

The Vancouver Observer's first comprehensive e-book about Northern Gateway, Kinder Morgan, Keystone XL and the future of oil sands development in Canada features original reporting and research from its award-winning team of journalists and writers. The series answers the following questions: What's the big-picture timeline? Who are all the parties involved, and what do they want? Most crucially, how will heavy oil projects impact the future of British Columbia and Canada?

Expect just the facts: who, what, when, where, how, and why it all matters.