John Seigenthaler died over the weekend at the age of 86.  I was lucky to have worked for him at the beginning of my career.  He embodied the best of what journalism can be, "a fearless voice of the people, a public trust." 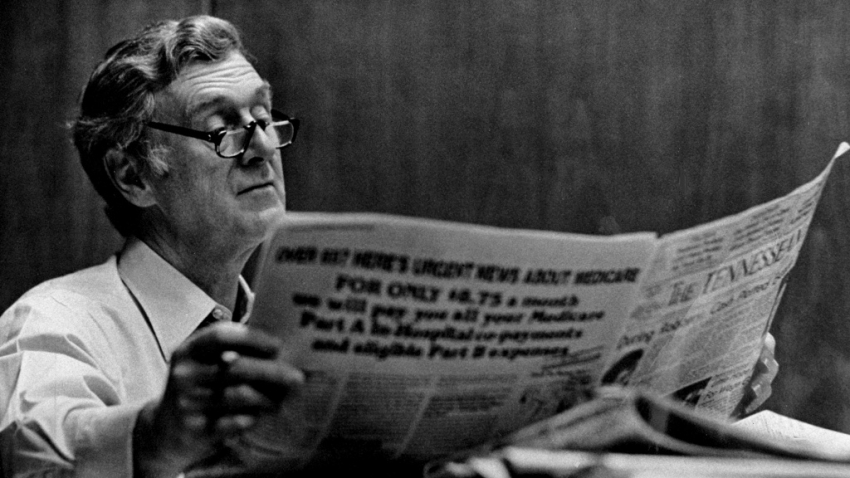 John Seigenthaler reads over the day's newspaper on May 13, 1982 Photo: Bill Welch / The Tennessean

It was the summer of 1978, and I was working at The Tennessean in Nashville.

The walls were yellowed with cigarette smoke, as reporters banged out stories on typewriters that hummed like cicadas. And in a frame on the wall at the end of the newsroom hung the unforgettable words: "Pity the Poor Reader".

The job at The Tennessean couldn't have been a better fit. The main reason was its legendary publisher, John Seigenthaler, who not only "definitely ran The Tennessean as a liberal newspaper," according to Historian E. Thomas Wood, but also used it as a training ground for investigative reporting.

As a rookie 21-year-old, I was excited to be working at the same newspaper where legendary journalists David Halberstam and Tom Wicker had cut their reporting teeth.

Halberstam, who went on to win the 1964 Pulitzer Prize for International Reporting, said that working in Nashville's The Tennessean was like having chosen "the finest graduate school." He told historian John Egerton in 2007:

The newspaper boasted a proud tradition as an aggressive, combative, fearless voice of the people, a public trust... And best of all, the newspaper was right in the thick of every fight, and I was like the proverbial kid in the candy store, just devouring everything I could get my hands on.

David Halberstam in The Tennessean newsroom. Photograph from The Academy of Achievement.

In 1962, Tennessean reporters Nat Caldwell and Gene Graham had won a Pulitzer "for their exclusive disclosure and six years of detailed reporting, under great difficulties, of the undercover cooperation between management interests in the coal industry and the United Mine Workers."

John Seigenthaler worked in an office at the far end of the newsroom. Prominent people – politicians, businessmen – sat on  folding chairs outside his office waiting to get in to see him. The long wait ended with a summons from  Miss Gardner, who fiercely protected his time and space.

Crammed with books, Seigenthaler's office was as serene as the newsroom was frenzied. An air conditioner unit  hummed through the summer while Seigenthaler sat behind a desk piled with news clippings and stacks of documents. I'd find him leaning back in his chair, twirling his reading glasses round and round.  He'd talk on the phone as if I weren't there, but when he got off, he'd zero in on whatever we were working on with his total attention.

Seigenthaler started working for The Tennessean in 1949 and became an award-winning reporter, renown for his courage. Once, he grabbed a man who was attempting to jump to his death from the Shelby Street Bridge up by his shirt collar, saving his life.

His reputation as a civil rights activist was widely known. He'd left the newspaper to work as an administrative aid to Robert Kennedy when Kennedy served as U.S. Attorney General, and was said to be one of the only people to witness the meeting between John F. Kennedy and Martin Luther King. He returned to The Tennessean in 1962 and became its publisher in 1973 – a year after Watergate. In a time of heroic journalism, Seigenthaler was one of the best in the field.

One day, Seigenthaler called me  into his office with Carolyn Shoulders,  a Nashville native with bright red hair and an infectious smile.  She was also a summer intern.

He handed us a stack of files he'd received from two Legal Services lawyers who had a series of clients with the same insurance issues.

Their clients lived below the poverty level, but owned a lot of what was called "industrial insurance".

This was burial insurance, and it was meant to provide funds for a nice coffin, a good funeral home, and an everlasting rest in a decent cemetery plot. Something that people hope for, rich or poor.

The lawyers noticed the disturbing trend of poor people buying this insurance. They took up a report they'd written to Seigenthaler and asked him to publish it. He told them he wasn't interested in publishing that report, but he was interested on investigating the issue.

It was election season. All the permanent reporters were covering beats for the many elections. Carolyn and I were interns, so we weren't assigned to any campaigns and were available.

Seigenthaler told us we were being taken off daily reporting for the City Desk to spend the next  six weeks going door-to-door through public housing projects and asking people to see their insurance policies. It was an incredible opportunity for two young women dying to break into the profession and land full-time jobs when we got out of school.