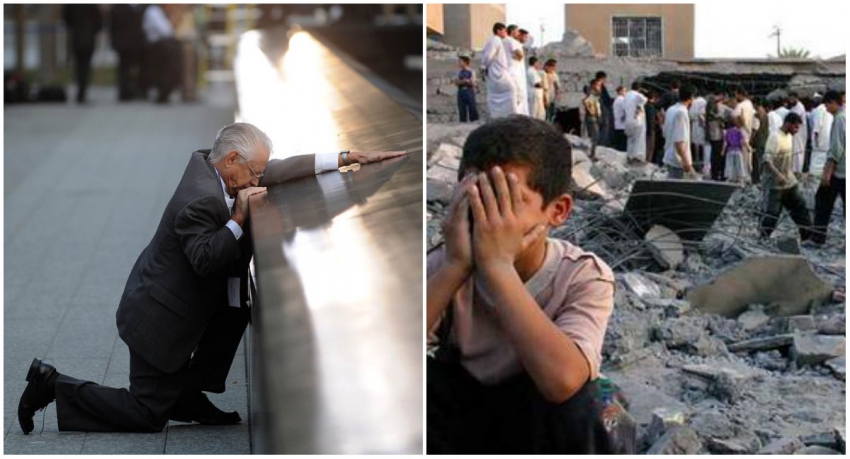 Thirteen years ago, I stood in a courtyard on New York’s Lower East Side.  I was pregnant and watching my son line up with other kindergarten boys and enter the school he might have attended through Grade 12. It was the third day of school, September 11.

Watching the boys enter three weeks later, the winds of war were blowing from Washington.  Bush was trumpeting the battle cry against a false enemy and a conflict that he said might last forever.

We mothers wondered if our boys would graduate Grade 12 only to be conscripted in the military.

The most striking thing I remember in the weeks after 9/11 when I remained in my home, cordoned off by the yellow police banners marking it as a crime scene, was the sense we all shared that New York City would forever be a prime target, the sense of inevitability that we would be bombed again.

As a friend I ran into on Spring Street put it, “We’re right in the middle of the bulls-eye. It’s not a question of if, but when.”

In those years, New York City has been attacked but minimally, while Iraqis, Bush's false enemies, have died by the thousands, the hundreds of thousands.  And they are still dying today.

Osama Bin Ladin is dead, as well, but I wonder,  did that really quell the loss suffered by those whose loved ones perished that day?

The boy who was walking into a NYC  kindergarten that day 13 years ago when the world forever changed, set off for university in Victoria last week and not for the military. Thank God. But what a strange trickster time is. Looking back, it seems almost as if I can touch that day, when that little boy turned and waved, heading into the New York City school.

I learned a great deal in the days I remained in New York City following the catastrophe.  Reading the accounts in the New York Times of the lives of the ordinary people who died in the World Trade Centre, faithfully chronicled down to the last one by the city newspaper, I was struck by how nobody expected to part that day.  Say good-bye forever.  So many words would never be spoken.

This is the tragedy of violence.  And every day,  the cycle continues, erupting from country to country, destroying lives. A war machine always needs more. More armies to buy guns to feed the bottom line. More conflicts to inflame, more people to kill.   Yes, if 9/11 taught me anything, it's to make sure  my love accounts keep balanced.  That if the words I am speaking  turn out to be the last, they’re what I meant to say.