BC Election: voting for the people and the planet 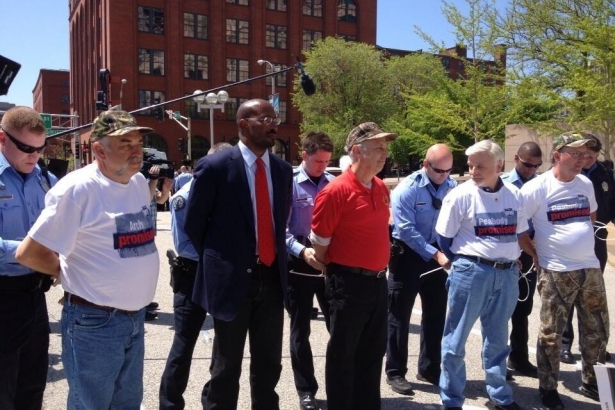 Last week Van Jones, the founder of the green jobs advocacy group Green for All, was arrested at a rally organized to protest against a major American coal company.

What's interesting about this is not just that Van Jones is a CNN correspondent and a former senior staffer for the Obama administration, sometimes called their "green jobs czar." No, what was really interesting is that he was standing shoulder to shoulder with the coal miners fighting to defend their pensions from a hugely wealthy coal company.

You may have expected that he would be arrested opposing the coal itself, fighting the causes of climate change and dangerous pollution. Indeed Van is outspoken about phasing out coal as well as all fossil fuels. As the keynote speaker at last year’s BC NDP convention, he called fossil fuels "energy made from death".  Given his strong feelings in regards to the need to get off fossil fuels you may expect that he would be more likely to be involved in the protests against the Keystone XL pipeline at the White House, and he was, but last week he stood shoulder to shoulder with the workers inside the fossil fuel industry, fighting for their rights.

I defended Van Jones as he was attacked on Twitter for what some saw as an inconsistent position. In response to one post I posed the question, "Why is it so hard to believe that he cares about people and the environment"?

As long as there is a fight between the economy and the environment everyone is going to lose one way or another. We need more people like Van Jones, and it turns out there are a number of them running in the current BC election.

As a former deputy leader and organizer for the Green Party and a runner up in the last leadership race, some folks have been surprised by my endorsement of some NDP candidates and my stated hope that the NDP will form the next BC government.

My goal has always been to find the best ways to make progress on environmental and social justice issues, not simply partisan politics. One of the things that drew me to the Green Party was the sentiment expressed by the leadership that the party existed to shift the debate and the encouragement for other parties to "steal our policies".  I am glad that the Greens have influenced the debate and that the parties most likely to form government are indeed borrowing from their policies. Now the question we must ask is, "Who is best suited to actually make these policies a reality?"

These days, I work for an environmental campaigning organization called ForestEthics Advocacy. I strongly believe that in a democracy the real power comes from the grassroots, and politicians will ultimately follow the leadership of the people. The West Coast is a magnet for those who love the environment and feel a responsibility to be environmental stewards. Any party hoping to be elected in BC needs to prove to the electorate that they will act on these broadly shared ethics.

The environmental movement has been asking for a strong position against the Enbridge and Kinder Morgan tar sands oil pipelines. It's been our biggest movement-wide "ask" in the months and years leading up to the election, and the NDP has stepped up and taken on the position we asked them to take. I think we need to acknowledge that the NDP has listened to this demand from the people of the province and have taken on the challenge of fighting off some of the worlds wealthiest oil corporations, their billionaire owners and their best political ally, Prime Minister Stephen Harper. This is no small task and they need us to have their back in this fight.

We need people like George Heyman, the former Executive Director of the Sierra Club of BC to get elected. George was also the president of the BCGEU, and was a progressive voice within the labour movement. He, like Van Jones, is the kind of guy that not only gets the need for environmental sustainability but he can legitimately bridge the gap between sectors and bring forward policies that create the kind of good local jobs we can be proud of.

At ForestEthics Advocacy we are actively supporting a handful of candidates we are calling "champions for the coast". Like George these are good people that will make great MLAs and strong advocates for solutions that work for people and the planet. George Heyman, Janet Routledge, Claire Trevena, Jennifer Rice and David Eby are the kind of people that deserve your vote regardless of what party they are running for.

In the last election the NDP lost in George's riding by a margin of only five per cent, a smaller number than the Green party's nine per cent tally.

The polls indicate that the NDP is most likely to form the next government in BC but there is no guarantee that the candidates who have gone the extra mile for our issues will win in their ridings.

Please think carefully about your vote before you make it. Take a close look at who the candidates are in your riding.

In his newest book Van Jones reminds us that the key to achieving progressive policies is a strategy of "no let up, no let down".

It's not simply enough to elect the better party in this election. The social movements that lead to the NDP's position on tar sands pipelines need to continue to work hard on this issue and a number of other issues that deserve more attention from all of us; for example, stopping the increase of coal exports from the United States moving through BC ports.

The NDP has shown that they are a party we can work with. We may not get everything we want, nor will industry, but what is important is they have made it clear they are committed to addressing the causes of climate change. That's a very important baseline for moving forward.

The fact this Adrian Dix brought Van Jones to speak at their first AGM with him as the leader was a good indication of the approach this party is open to taking on these issues. Lets work together with the party to support an economy in BC that matches our values.

On May 14th I hope you will vote for the candidates and the party most likely say "Yes" to green jobs and say "No" to bad ideas like the Enbridge and Kinder Morgan pipelines.

BC Election: BC's most valuable resources on the line

Lessons from Deepwater Horizon: how oil spills could impact BC tourism

BC provincial election: the cool kids have voted early

At Board of Change debate, four BC pols ruminate on how to keep public happy