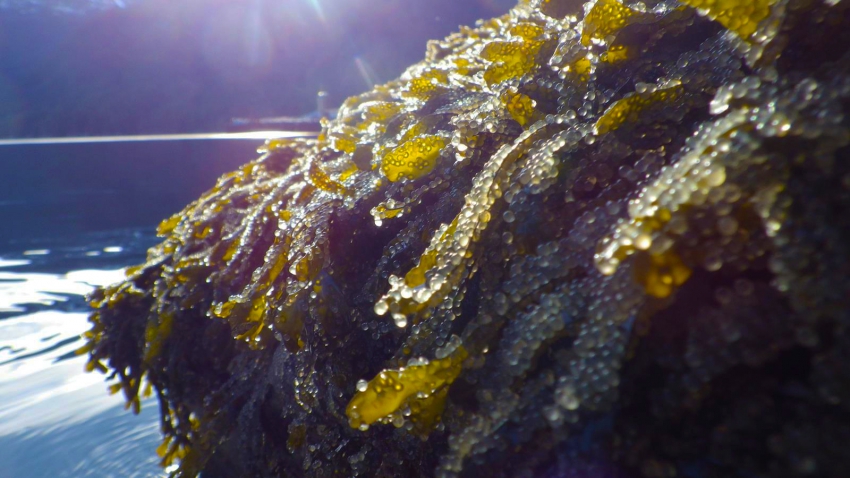 Photo of Herring Spawn and Woodfibre in background

Despite the recent oil-spill harm done to Vancouver’s Burrard Inlet, Squamish’s Howe Sound is recovering from its industrial past. Sightings of marine mammals are on the rise. Last year orcas drove 100 Pacific white-sided dolphins into a blind channel and began to dine—just a stone’s throw from downtown Squamish. What other region boasts such wildlife viewing awe?

So why are marine mammals returning? Ecology is complex and there are multiple factors at play. However, some think the return of a certain little fish may have something to do with it.

Herring are foundational to marine food webs. They provide food for everything from sea-birds to seals, dolphins to humpbacks, coho to Chinook salmon. It’s no wonder orca—wolves of the sea—are doing rounds in the Sound.

Is this the good-news story we’re all craving at a time when climate-change-oil-and-gas dread dominates the airwaves? It could be. But the story isn’t over yet.

A proposed liquefied natural gas plant to be sited across from Porteau Cove Provincial Park, along the Sea-to-Sky Highway.

If this LNG plant is approved, Howe Sound will see about 40 tankers plow her waters per year. Road trips along the scenic Sea-to-Sky will be marred by an industrial complex and 115 metre flare stack. And Squamish’s beloved estuary may go under the knife to accommodate an underground pipeline.

Another impact lies just below the surface

LNG plants transform natural gas to liquid to facilitate shipping in tankers. This uses massive amounts of energy, which in turn produces heat that needs dissipation. The proposed plant will use a marine cooling system. From our read of the application, about 17,000 tonnes of water per hour will be drawn through an intake pipe 27 metres below the water’s surface. It’ll cool the plant and be returned to Howe Sound, hot and chlorinated.

Outreach material produced by Woodfibre LNG state, “the intake will be located in deep water (over 25 metres), well below the layer where marine organisms including herring larvae and juvenile salmonids are found in the greatest numbers.” This 25-metre depth is recommended by federal guidelines.

After a cursory look at the 1991 federal guidelines, troubling issues rise to the surface:

Is this how our government builds a “World Class” LNG industry?

In 2010, California adopted new regulations that require plants to stop using "once-through" cooling systems. The State Water Board says they are “dangerous to marine life” and kill millions of marine animals every year.

Why is this cooling system classified as dangerous in California, but “World Class” in BC?

Why haven’t the 1991 federal guidelines for marine intakes been updated and brought into the 21st Century? Are the costs for modern technology and a sustainable LNG industry too grand? Will Howe Sound end up paying these costs in dead fish?

Well, the story isn’t over yet.

Although the proposed Woodfibre LNG plant is undergoing a provincial environmental assessment, the federal government must also make a decision on the project this summer.

And as you know, a federal election is scheduled for October. Get the picture?

If enough people express displeasure with Woodfibre LNG to local MPs, they may  get nervous about their party approving an unpopular project leading up to an election. With the Mount Polley disaster and English Bay spill still in our rear-view mirror, many British Columbians have had enough World Class lip service.

Help protect Howe Sound and its magnificence. Engage with local groups you know and trust and please sign the Declaration to Protect Howe Sound. Big and little fish will thank you for it.