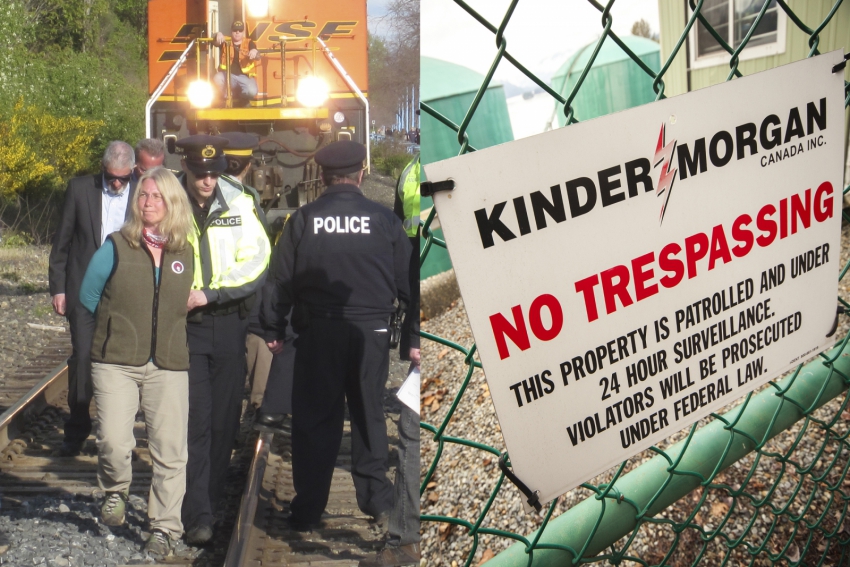 Several citizens have camped out on Burnaby Mountain in protest over the access granted to Kinder Morgan to resume its pipeline test drilling by the National Energy Board on Thursday.

The company can now give the City of Burnaby 48 hours notice, and legally access the contentious Conservation area.  They have erected a physical blockade of wood and construction materials to prevent access to the bole hole areas the company wishes to drill.   They say they have 100 people ready to attend.

SFU biochemistry professor Lynne Quarmby is among those attending the site, and says she is prepared to be arrested to stop the activity.  She previously was arrested in 2012 for blocking coal trains for export.  This is her commentary below.

In the past 24 hours tensions have been rising as we anticipate the return of Kinder Morgan with an injunction and orders for us to be arrested. A group of us has been holding vigil in the Conservation Forest on Burnaby Mountain since the September 3 felling of thirteen trees by a Kinder Morgan crew.

The bylaw-violating tree cutters were doing preparatory work for the proposed Kinder Morgan Expansion project, which aims to pipe diluted bitumen flowing from Alberta to fill oil tankers destined for Asia. Last week the NEB awarded Kinder Morgan the right to access and work in the Burnaby Park, provided that they give the City two days notice. On Friday, Kinder Morgan gave that notice. We don’t know when they will arrive.

We sit there in the weather and exchange stories. We are union employees, students, professors, music teachers, and unemployed.  Most of us did not know one another before our involvement in this action. In diverse ways, we are all moved to protect this land. Sitting there in the beauty of the dripping forest an aboriginal man gave me stories of his life and his people, a gift that launched me on a personal journey of reconciliation. We are becoming a community.

The NEB has favored Kinder Morgan in every decision so far, showing complete disregard for the Coast Salish people concerned about the disposition of their land; the people of Burnaby concerned about parkland and neighborhoods; and the large numbers of British Columbians who do not want to see an increased risk of oil spills on our coast. These concerns the NEB have heard and rejected. They have refused to even listen to those of us concerned about climate change.

Here are three facts about climate change that deserve your attention:

The only world in which it is okay to continue building new infrastructure for fossil fuels with no consideration for climate change is a world where we don’t care about the future, or about other places on the globe, or about disappearing species, or about ocean acidification.

I live in a world where we care about these things. And in my world we have a moral obligation to do everything in our power to stop construction of new fossil fuel infrastructure that is approved without consideration of the cumulative effects on climate change. Unfortunately, we are running out of options.

The mad push for pipelines, coal ports, fracking and LNG plants without consideration of the impact on climate change is wrong. Until our governments wake up to that truth, we can expect to see increasing numbers of citizens engaging in direct actions to block these projects. I will be among them and I hope that you will support us.