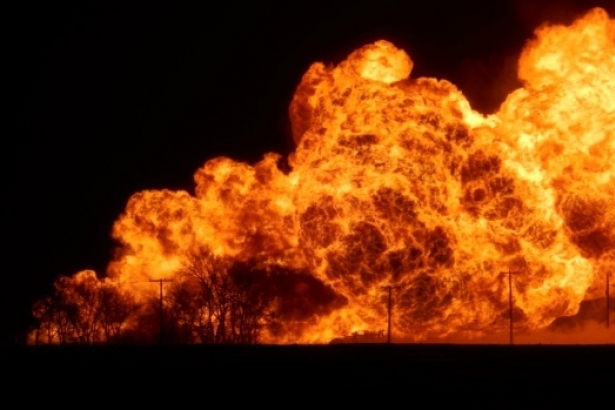 The company seeking to build the Keystone XL tar sands pipeline has had a massive explosion on its decades-old natural gas pipeline in southern Manitoba. The rupture of the TransCanada PipeLines (TCPL) gas line occurred in the middle of the night on Saturday, January 25 near the village of Otterburne. A massive fireball erupted into the night sky and burned for many hours.

The explosion tore a large crater in the ground. Several thousand homes in ten small communities were left without their gas heating during temperatures that have dipped to minus 30C. It will be some days yet before full service is restored.

The pipeline brings gas from Alberta to the U.S. across the Manitoba-Minnesota international border. It feeds parts of southern Manitoba along the way.

The company says it may take months to find out how the accident occurred. This news article from the Winnipeg Free Press reports on what is known so far. There were no injuries.

The line that exploded is a southward branch from Winnipeg of the TCPL gas pipeline that transports gas to eastern Canada across northern Ontario. This is the route that the company is proposing for a multi-billion dollar Alberta tar sands pipeline that it calls ‘Energy East’. It would reach Montreal and points east. The oil industry and the Canadian government want the line to extend all the way to Saint John, New Brunswick. Another possible branch route from Montreal would connect to Portland Maine.

If the fossil fuel industry has its way, much of the export route for tar sands and fracked gas in western Canada will be via the BC coast. Coal shipments (including from the U.S.) are already transforming Vancouver and Prince Rupert into the first and third largest ports for coal exports in North America.

Now, a working group of the BC and Alberta governments established late last year has issued a report with 21 recommendations to speed everything up. The report should set aside any misunderstanding that the BC government has ‘five conditions’ it wants to see met before it would support the Northern Gateway tar sands pipeline proposal. The conditions were a public relations ruse to buy time for the government to overcome environmental and First Nations opposition.

U.S. scientists are warning that there are environmental risks, regulatory holes and serious unknowns regarding the shipment of Alberta oil-sands products by pipeline, rail and tanker. The findings are reported in a 153-page report last September by the emergency response division of the U.S. National Oceanic and Atmospheric Administration.

In addition to all the gas and tar sands pipeline projects proposed in western Canada, there are two major hydro-electric projects on the planning boards—the $8 billion Site C dam on the Peace River in northeast BC and the $6 billion Keeyask dam on the Nelson River in northern Manitoba.