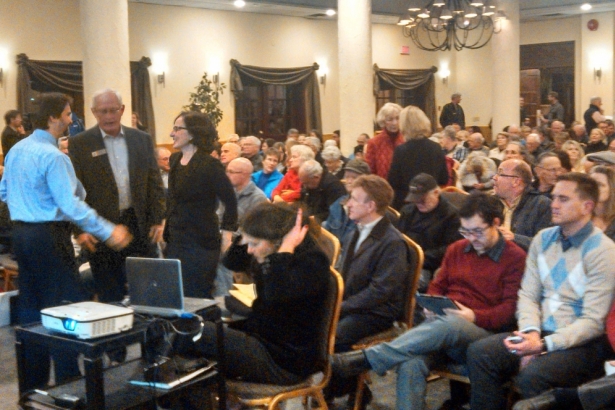 The city councils of Surrey and White Rock say they are keenly interested in a relocation inland of the railway line that runs along their ocean shorelines. That message was welcomed by most of the 400-plus people attending a public forum on the topic that the two councils hosted at the Pacific Inn in south Surrey on Nov 26.

The forum featured Surrey mayor Dianne Watts and White Rock mayor Wayne Baldwin. Each was given much applause when they declared that it’s time to move the line inland.

The case for relocation of the BNSF line has long been compelling. But the realignment proposal begs several important issues that were not answered at the public forum. These include what, if anything, will be done with the air, noise and chemical pollution that accompanies the diesel-powered rail line; and whether a faster and safer rail corridor would end up facilitating expansion of coal and oil transport by the rail operator, Burlington Northern/Santa Fe in partnership with the ever-ambitious Port of Metro Vancouver?

The case for relocation

The historic line that connects the Vancouver region to Seattle was completed just over 100 years ago. Its current ownership incarnation is Burlington Northern/ Santa Fe (BNSF). The railway giant was acquired by the Warren Buffett-owned Berkshire Hathaway conglomerate in 2009. The section of line in question is 19 km long, from the U.S. border north to the east-west line in south Surrey that is operated by CN Rail.

Transportation and environmental advocates (though curiously, not many business interests, it seems) have lobbied for realignment for decades. The White Rock and south Surrey waterfronts are made dangerous and unwelcome by the trains that pass.

According to one participant in the Nov 26 forum, trains there have killed 19 people and maimed 34 over the decades. The most recent death was a jogger in September.

The line’s rail bed and bridges are deteriorating or are downright dangerous. In south Surrey, the steep slope that rises inland from the line is unstable. During heavy rains, it is subject to slides that can derail trains. In 2010, winter rains forced Amtrak to cancel its daily passenger service along the stretch for ten days.

Diesel exhaust pollutants and nighttime noise are serious public health concerns. So too are the carloads of dangerous chemicals—including chlorine gas and propane--that are transported southbound. The Crescent Beach neighbourhood is completely cut off from emergency road access by the lengthy trains as they slowly pass.

The line has degraded the habitat of much of the animal and marine life that could otherwise prosper in the rich setting where the ocean meets the land.

Similar safety concerns prevail south of the U.S. border in Washington State, including in the waterfront northern suburbs of Seattle and in the city of Bellingham.

Mayor Baldwin voiced safety concerns at the forum by presenting a fictional but harrowing account of what could go wrong with a train carrying dangerous chemicals.

Relocation is driven by two rising concerns—the increasing transport of dangerous chemicals by train, particularly oil, and by the growing number of coal trains using the stretch.

The oil train explosion in Lac Mégantic, Quebec last July 6 has transformed awareness of railway safety in North America. Forty seven people died there when an oil-by-train scheme that was hatched by Irving Oil of New Brunswick turned disastrous. The company had contracted to transport oil from North Dakota’s Bakken field by rail across the continent to its refinery (Canada’s largest) in Saint John. The project passed muster with federal and state/provincial authorities in Canada and the U.S. The disaster occurred little more than one year after the scheme got underway.