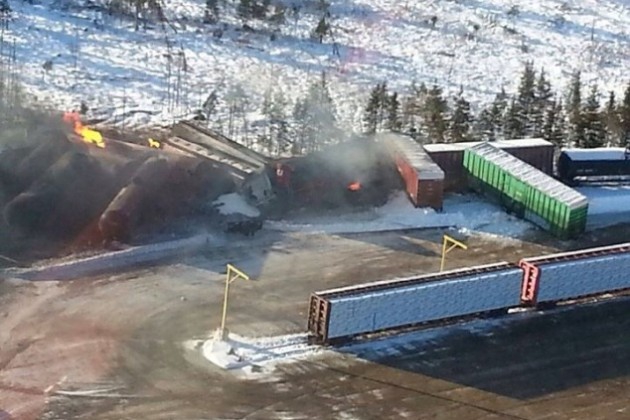 North America’s frenzied oil-by-rail industry began the new year in the same way it ended the old one—with a spectacular derailment and fire of oil train cars on the outskirts of a small community. It’s the latest calamity by an industry growing at a pace that should frighten anyone concerned with public safety and the world’s warming climate.

Concern is further underlined by a new derailment--seven cars in a 152-car coal train derailed in the center of the Vancouver region on Jan. 11. Nearby is a CP Rail route that handles daily shipments of oil to a refinery on the shore of Vancouver harbor.

The latest oil train derailment took place near the town of Plaster Rock in northern New Brunswick along the main CN Rail line that connects the ocean ports of Halifax, Nova Scotia and Saint John, New Brunswick to Montreal and points west. In the early evening of January 7, 19 cars and a rear locomotive in a mixed-cargo, 122-car CN train derailed. Five of the cars contained crude oil and four were carrying liquefied petroleum gas (propane or butane).

Two hundred people were ordered to immediately evacuate their homes in the area. It was three days before they were able to return home, though some still don't have permission to do so. Traffic along the rail line has resumed.

Details of how many of the cars caught fire are still sketchy. At least one oil wagon, two propane wagons and the locomotive caught fire. The two burning propane wagons and a third one were deliberately blown up on Jan 10 to expedite the clean up and a return to train traffic. Without the controlled explosions, the propane cars would have burned for days longer. A special team from Louisiana was called in to perform the detonations.

According to CN, there were 45 cars carrying dangerous chemicals in the train. Plaster Rock is 30 km east of the Trans Canada Highway and the nearby international border with the U.S. state of Maine. There were no immediate injuries.

The oil and propane cars were loaded in western Canada and destined for the Irving Oil refinery in Saint John. Irving is a family-owned, industrial conglomerate that dominates the economy of Atlantic Canada and has a large presence in northern New England. Its oil division was the contractor that brought the oil train through Lac Mégantic, Quebec on July 6 last year. That derailment killed 47 people, obliterated the center of the town and spilled millions of liters of oil into the adjacent lake and river system.

Residents in and around Plaster Rock saw the night sky light when the derailment happened. Andrew Simpson told CBC, “We were playing cards at my uncle’s, the table rumbled, we looked out, and the window was orange. Everything was on fire across the road.” 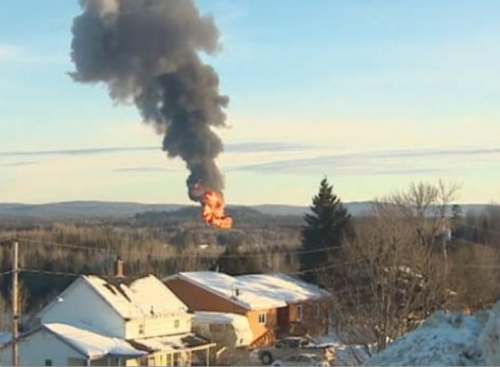 The derailment occurred close to the Tobique River, a major tributary of the St. John River, the largest in Atlantic Canada. It is not reported whether any oil has escaped into the river system.

The first responders to the scene were the members of Plaster Rock’s volunteer fire department. As the CBC reported, in an understatement, “they were not ready for this”. By the next morning, the town was overrun with out-of-town emergency equipment and personnel from CN and Irving Oil and from nearby jurisdictions. But the fire was too intense to fight. CBC news reported one day later, “Residents, railway officials and first responders can only wait, watch and hope for the best.”

Volunteer firefighter Darren Burgoyne was among the first on the scene. He said he and his colleagues did not know what they were dealing with. He told CBC, “The scary part for me was the huge plume of black smoke that was blowing right towards… the village. But it was more or less bypassing us … and of course our fear was we didn’t know if it was toxic or not.”

This accident follows by nine days an oil train derailment outside the town of Casselton, North Dakota. There, 20 cars of a 104-car unit oil train derailed and exploded in spectacular fireballs that were captured on amateur film by nearby residents.

Reassuring words from industry and government

Among the CN personnel soon on the scene at Plaster Rock was company CEO, Claude Mongeau. He held a press conference the morning after the accident and began by offering an apology.