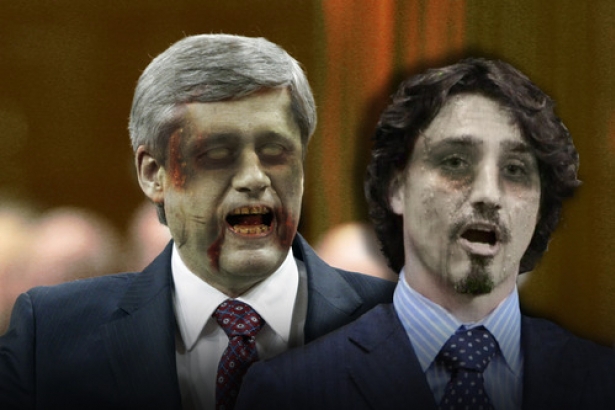 Uncannily occurring the week of Halloween, there is word today that Liberal leader and possibly the next Prime Minister of Canada, Justin Trudeau, has contracted a virus displaying "zombie-like" symptoms.

Uncannily occurring the week of Halloween, there is word today that Liberal leader and possibly the next Prime Minister of Canada, Justin Trudeau, has contracted a virus displaying "zombie-like" symptoms.

"He [Trudeau] has been showing symptoms for some time, but it wasn't until last week on a trip to Washington, DC that we saw the virus really take hold. We are hopeful that it won't spread to the rest of the Liberal Caucus, but this particular virus can be really contagious if it is not contained quickly. It is one day at a time, and the long term outlook is good if the Liberal leader sticks to the daily regimen proposed by his medical team."

Last week in Washington, DC it was clear to many that something was amiss with the young leader. At a panel discussion hosted by the left-leaning think tank, Center for American Progress, Trudeau told attendees that he supports TransCanada’s proposed Keystone XL pipeline that would carry unprocessed tar sands crude from Alberta to refineries on the Gulf Coast.

Obviously taken aback by this statement, reporters asked Trudeau to clarify his support for the controversial pipeline and in an obviously fevered and somewhat droning (zombie-like) voice, Trudeau stated again that: “My support for Keystone is steadfast.”

While Trudeau has traveled extensively in the past, this was his first trip ever to Washington, DC which has medical experts thinking that it may be related.

Medical expert Dr. Mary Arachna at the Organization for Oil Zombification Education (OOZE) in Transylvania County, North Carolina had this to say:

"It is clear that this young man has undergone some type of zombification. What we see often here at the Center is young, charismatic leaders fall under some kind of spell, whether it be through a hypnotic trance brought on by oil lobbyists, or in more extreme cases an actual bite from a Republican or conservative politician. Either way, the result is devastating to future generations who will have to deal with the messy circumstances that come along with vocal support of such things as the expansion of the tar sands."

Other scenarios are currently being run by OOZE on what exactly Justin Trudeau will look like if the virus overruns the young leader. They are asking experts to add their own depictions to a Zombies Got Canada Tumblr page.

There is some controversy in the zombie-medical community though.

In a brief statement, the lead U.N. negotiator with the Zombie Nation, Professor Elvira Desdemona, pointed to the fact that Trudeau showed symptoms of oil lobby zombification earlier this year when he came out publicly praising Alberta Conservative Premier Alison Redford's efforts to convince US President Barack Obama to greenlight the Keystone XL project.

"It is a scientific fact that Redford has been zombified by the oil lobby," read the statement from Prof. Desdemona. "And it may be the case that Trudeau initially contracted the virus from the Alberta Premier. Either way, it is clear that the symptoms have been exacerbated on his trip to Washington, DC where oil lobby zombification has been at epidemic levels for many years. Even President Barack Obama is suspected to be a carrier and a potential victim of the disease."

Trudeau is currently undergoing treatment, which mainly entails a series of briefings from top climate change scientists, such as Dr. James Hansen who consider the Keystone XL pipeline the "linchpin" to tar sands expansion efforts and runaway climate change impacts.

Other experts in the field of oil lobby zombification are running scenarios on what exactly Justin Trudeau will look like if the virus overruns the young leader, and they are asking artists and other such creative thinkers to add their own depictions to a Zombies Got Canada Tumblr page.

The Canadian progressive community is also rallying together with plans to hold events across the country on November 16th. Experts consider mass amounts of public pressure as one means of curing Trudeau of this unfortunate ailment.