I'm sorry for my inappropriate tweet to MP Chrystia Freeland 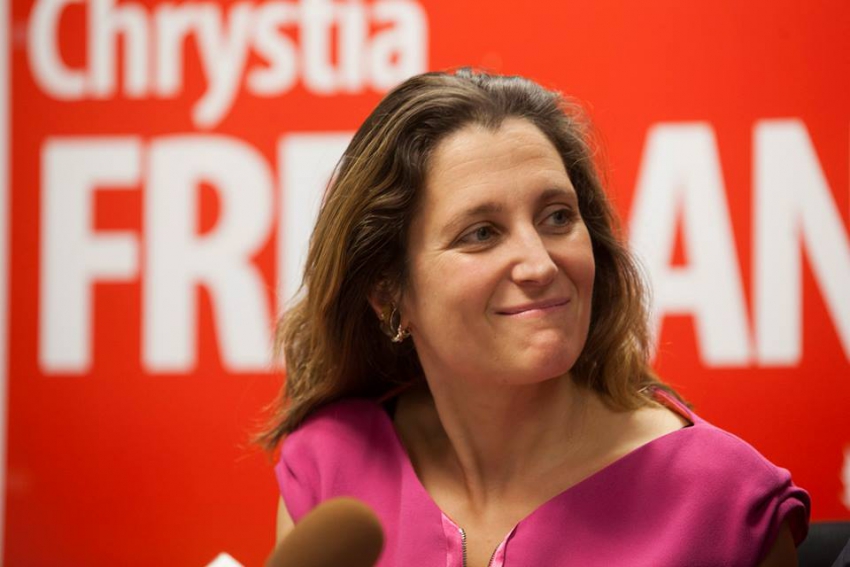 Liberal MP Chrystia Freeland took the floor during question period yesterday to talk about an issue important to all of us - the economy.   A lot of voices rose to shut her down and I'm sorry that mine was one of them.

Freeland tried to question the Minister of Finance about why the government is ignoring the harsh reality of the economy that has cost Canadians jobs and economic growth and which was documented in a report by the IMF - but the Conservatives wanted none of it.

"Mr. Speaker, I see the government is not interested in the view of the IMF economists, but I think Canadians are. Let me continue to quote from that report. The IMF warns..." said Freeland, until she was again interrupted.

Freeland was trying to stress that "The story that the IMF tells is of Canada's 'Lost Decade' - That Canada's exports have barely recovered from the Great Recession. The IMF warns that low productivity growth has 'eroded Canada's external competitiveness - especially in the manufacturing sector'".

Her rising strength and persistence to get a point across and ask the question amidst heckling and interruption - which is an all-too-familiar situation facing women in politics - led her to be inappropriately silenced by booming voices and shouting.

She was unable to ask the question.

Then, I took to twitter and commented on her delivery, suggesting that she use her "big girl voice". This was an immature comment and a mistake that I deeply regret. One that perpetuated a continuing issue. I can't change what was said and it shouldn't have happened in the first place. I wish I could take it back, but of course, I can't.

Gender discrimination in the male dominated world of politics is a systemic issue.

Take for example the case of Helena Guergis, who was used as a 'prop' for the Prime Minister, coached by members of her caucus and told by one of her own to use her "Big Girl voice".

I had heard those words before - but by no means should that have ever justified my decision to use them.

In those days of dizzying ascent Helena Guergis was awarded the “special chair” behind and to the side of Stephen Harper. The special chair meant that a beautiful woman would always be on camera nodding in agreement as the PM gave his non-answers. The party even had an answer for her small voice — voice training lessons in Montreal that would help her to project with more authority when she spoke.

“In question period rehearsal, Stephen, other cabinet ministers and Jenni Byrne would sit there watching. Sometimes some of them would coach. When I lapsed into my real voice, because it was hard to project that phoney one for too long, Peter Van Loan would urge, ‘Helena … Big Girl voice, Big Girl voice.” said Guergis in a 2013 interview with iPolitics.

Canada adopted a Charter of Rights and Freedoms that reinforces equality for women. My comment does nothing to advance the continued uphill struggle faced by women every day in trying to achieve gender equality, let alone in the harsh world of politics.

I am going to make amends, and will be listening more carefully to what women members say. And I'm going to be looking to highlight their accomplishments - and their challenges. I will be learning from them.

As someone who is in a fortunate position to have a public platform, I should never have tweeted so thoughtlessly, and perpetuated words that have already resonated in a negative way to female MPs.