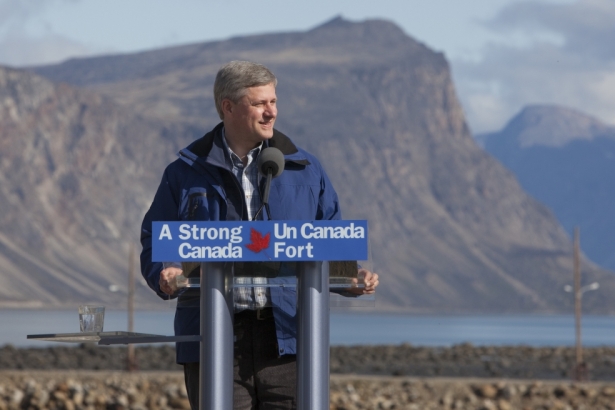 He’s making a list, checking it twice and going to find out who’s naughty or nice.  Ask just about any Canadian child who is eagerly anticipating the holidays, wide eyed and sugar-high, and they will share that Santa Claus will soon arrive, bearing gifts and toys for all good girls and boys.

But where does Santa Claus live and where do all the toys come from?  Ask again and the undeniable answer is “The North Pole”, the earth’s most northernmost point, located in the middle of the Arctic Ocean under an almost permanent layer of ice, yet subject to the most contentious jurisdictional ownership debate amongst the territorial arctic nations.

If the Harper Government has a wish list for Christmas, owning the North Pole is at the top of the agenda, perhaps to establish a permanent Canadian home and citizenship for the jolly old elf known as ‘Santa Claus’.  Explain this to any child who recently sent their wish list by mail and they’ll exclaim that “Santa is Canadian!” After all, Canada Post authoritatively lists his mailing address as Santa Claus, North Pole, HOH OHO, Canada.

No child’s play, however, the Harper Government wants to secure a gift that keeps on giving - by laying claim to massive oil and gas resources deep below the Arctic surface, where, according to the U.S Geological Survey, 13% of undiscovered oil reserves (almost 90 billion barrels) and 30% of undiscovered natural gas reserves remain untapped – certainly an asset to the economic future of Canada and that of the global economy.

The Harper government has dispatched scientists to the North to undertake further mapping of the Continental Shelf, specifically around the 1,700 kilometer long underwater Lomonosov Ridge, which runs from Ellesmere Island towards Siberia.

“Prime Minister Harper has tried to brand himself every summer as a Prime Minister who has an Arctic Vision" said Green Party Leader Elizabeth May.

"His Arctic Vision is ‘tunnel vision’ and that’s the problem” May said bluntly.

“We are securing our sovereignty, we are expanding our scope, our economic and scientific opportunities in defining Canada’s frontiers,” Environment Minister Leona Aglukkaq said following Prime Minister Stephen Harper’s last minute decision to claim the North Pole in a recent application to the UN Commission on the Limits of the Continental Shelf.

“Our goal is to define our territory as the biggest territory in the world” said Foreign Affairs Minister John Baird.

When Baird and Aglukkaq were asked what resources lie beneath the claim, Baird responded: “It’s not a question what’s there.  We don’t have the maps and scientific research.  For us, it’s obligatory to have the maps and research in order to assert as much Canadian authority and territory as possible, and we need the map to make these claims”.

Straying from the focus of studying, preserving and protecting the Arctic environment, Canada has pushed an agenda that has invited corporate interests into the development of Arctic resources.  Canada is currently chair of the Arctic Council, an intergovernmental forum comprising the eight territorial nations of Canada, Denmark, Finland, Iceland, Norway, Russia, Sweden, and the United States.

One of their first actions on assuming control of the council this year has been the establishment of the ‘Circumpolar Business Forum’, to be held in 2014 and which aims to foster collaboration across some of the world’s largest oil and gas companies that are focused on Arctic resource extraction.

“We’re obviously staking something larger towards the North Pole. This is an evidence free government, with little respect for science. This looks like a ‘Hail Mary’ pass at the last minute to claim the North Pole” said May.

The move is political, insists International law expert Michael Byers.  “Harper doesn’t want to be seen as the Prime Minister who surrendered the North Pole, even if the facts don’t fully support a Canadian claim” he said.

Byers also asserts that the North Pole is not a viable option for oil and gas extraction due to location and costs.

"Arctic security will not be made through jurisdictional claims. It will be about protecting the ice" said May, who feels that the Harper Government's aim on extracting hydrocarbons in the Arctic will only continue to increase greenhouse gas emissions, leading to a further reduction in sea ice.

Criticized they may be, however, the Harper Government has decided to cast themselves into Santa’s good books this season, making light of their Arctic claims in the defense of Santa Claus.

“The person who we most look to this year to give gifts, including my daughters, is Santa Claus and we are going to stand up for all young Canadians in the spirit of Christmas who are waiting for Santa Claus to visit” said Parliamentary Secretary to the Prime Minister Paul Calandra.

“Join with us in making sure the North Pole remains part of Canada.  For all of those kids around the world who are depending on Santa Claus, stick with us, and keep Santa Claus Canadian” Calandra said.

“He is a Canadian citizen and we will defend him all the way to the United Nations when we make our claim for the North Pole. I am proud of that” said Calandra. After all, who doesn't want Canada to own the North Pole and share Santa Claus with the rest of the world.

But it was Elizabeth May, who said it best, taking aim at the Harper Government’s Arctic carbon agenda and Calandra’s remarks sating: “I am advised by Santa Claus that there will be a lump of coal in the member’s stocking”.  Looks like it will be up to Santa to decide if Harper's wish will be fulfilled.