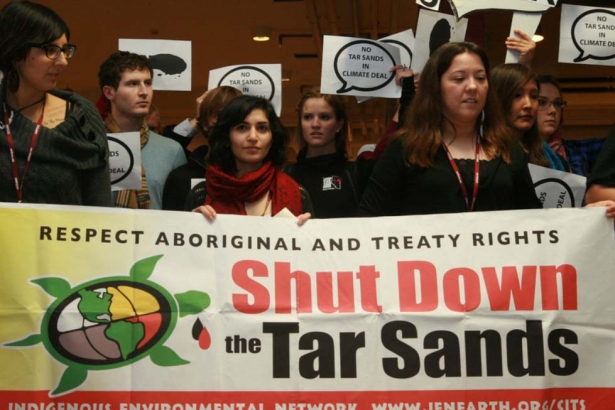 The anti-environment offensive by Canada’s fossil fuel industry and its flacks in government is radically shifting the political landscape of the country.

Each day, it seems, brings some new announcement and outrage being committed against Earth and the humans. More pipelines to be built, and more leaks and cover-ups of existing oil and tar sands facilities that poison the land and water. More threats of oil train disasters as the rail industry and governments claim they can make it safe. More Arctic sea ice loss and the disastrous consequences that will certainly result.

Quebec’s government has given the ok for oil companies to begin to drill in the Gulf of St. Lawrence. The government in New Brunswick is refusing to heed the demands of much of its population to place a moratorium on natural gas fracking. In British Columbia, the government’s wildly optimistic forecast for the highly destructive liquefied natural gas industry it wants to foster has been likened by one Vancouver writer to the hallucinations of someone on LSD.

A newly unsettling sign is that for the first time since the Conservative Party captured the federal Parliament in 2006, not a mention was made of “climate” or “the environment” in one of its budgets, the latest one delivered on Feb. 11. In so acting, the government has specifically ignored a study issued last August by a committee of its own deputy ministers convened to examine climate change.

The government has kept the study under wraps. A news report on it explains, “A wide range of climate-change impacts are being felt across Canada, the report says, including disappearing Arctic sea ice, thawing permafrost, rising sea levels, and increased risks of severe weather, and ‘it is likely that these conditions will be exacerbated as the climate continues to change in the future.’”

All this comes as the federal government is taking new steps to muzzle critics of its pro-fossil fuel policy. The Canada Revenue Agency is pursuing lengthy and extensive audits of some of Canada's most prominent environmental groups to determine if they comply with guidelines that restrict political advocacy.

To quell growing public unease and opposition to the corporate assault on the environment, capitalist governments around the world are stepping up spying and disruption against social and environment-defense movements and activists. Canada is no exception. Late last year, journalists at the Vancouver Observer published revelations of infiltration and spying by the country’s political police.

In the midst of all this, political parties that many consider to be on the progressive side of the political equation in Canada are taking the wrong side on several of the largest industrial projects of the fossil fuel juggernaut. The Green Party and the New Democratic Party made pronouncements earlier this month that can only further radicalize and prompt new forms of political organization among growing sections of the population concerned about the fate of the Earth.