Does Toronto’s support of their mayor foreshadow the political movements we can expect to see in Canada's future? 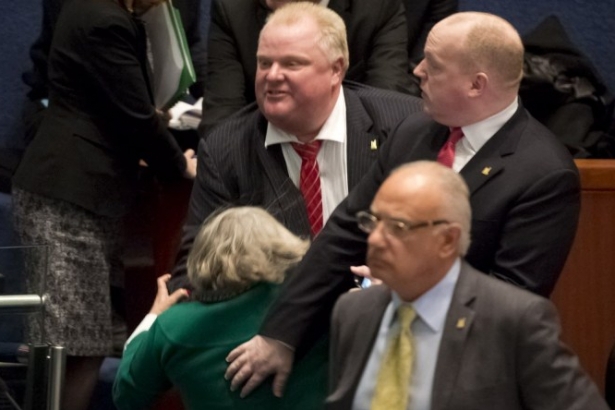 A special meeting of Toronto City Council was convened four days ago to deal with the city’s ‘Ford problem’. It was the most bizarre chapter yet in the scandal surrounding Mayor Rob Ford.

The meeting was convened by city councilors to adopt measures to reduce the power and financing of the mayor's office. The council majority has supported Ford in office, but the man has become a liability for business interests in the city. They need to reign him in.

Toronto City Council does not have the power to remove Ford. But it does have the discretion of asking the province to do so. However, concern over a pro-Ford, right-wing political backlash as well as the fact that many city councilors support Ford’s austerity and anti-working class police prevent the council from turning to the province.

In an editorial three days ago, the liberal editors of the Toronto Star also resigned themselves to Ford's continued occupation of the mayor's chair.

The Monday meeting was mission accomplished—for all intents and purposes, a deputy mayor will now head the city. But the corralling of the mayor was accomplished at the price of enduring another embarrassing, bruising confrontation with Ford, his city councilor brother, Doug, and their supporters in the visitors’ gallery.

The circus that day was described well by Postmedia’s Christie Blatchford. Toronto Star columnist Royson James also described some of the proceedings. Here is a flavour of the day as James described it:

"With his brother, Councilor Doug Ford, playing Terminator to the mayor’s Rambo, the fearsome twosome give every evidence that local politics could deteriorate from weeks of comedy to months of tragedy.

Over the past few rancorous days, the Brothers Ford teamed up to try to intimidate councilors as they voted on sanctions against the mayor. They have threatened to disrupt council, filibustering on issues to shut down city business, and given every indication that the mayor won’t shrink away and seek help for suspected drug and alcohol addiction.

On Monday, while councilors debated the motion stripping Ford of his powers, the mayor walked over to the crammed public gallery and taunted citizens. The act created a ruckus and Speaker Frances Nunziata recessed the meeting.

This, in turn, aggravated the exchange. Citizens started chanting, “Shame, shame, shame.” The mayor’s brother joined the fray and it deteriorated into an ugly confrontation.

"You are a disgrace,” one citizen shouted. “How do you know Anthony Smith, you lying scumbag,” another shouted, referring to the man captured in a posed photo with the mayor in front of a residence police describe as a crack house. Smith was later slain in a downtown gun attack.

"You are the scumbag, you little punk,” Doug Ford shot back. And on and on it went...

The mayor told the meeting that its measures to restrict his powers are akin to Iraq's invasion of Kuwait in 1991. "You have just attacked Kuwait," he said. “This means war” in the 2014 mayoral election, he declared.