Doomsday theory 2014: Obama as the anti-Christ

The end of America? Obama as the anti-Christ? Jennifer Aniston? Must be a doomsday theory. Funny how climate change doesn't merit a mention.

How the world will end: Not with a bang, but with a soundtrack

2012 came and went with no apocalypse. No economic implosion (we got that one a few years earlier). No Rogue Planet Nibiru. Those who were so sure were left scratching their heads, while the rest of us chuckled under our breath. In fact, you just escaped a brush with doomsday over the weekend, as the Comet ISON made its fateful visit to the Sun.

2014 has its own batch of theories pertaining to the end of the world as we know it. Are they as weird as the 2012 theories? Yes.

We can categorize doomsday theories into a few broad categories:

There's some overlap among these elements, to be sure. For example, a religious war sparks economic collapse. The Rapture is brought about by a comet. You get the idea.

The video above is titled "April 2014 the appearing of the anti-christ and who it will be". So, a fairly descriptive title. It's not a planet-wide doomsday-theory video, but merely a prediction of how America will fall, accompanied by the sort of catchy tune you'd expect to see in a fan-made movie trailer.

It takes the video exactly two seconds to get to Israel, but they spend ages in getting to Obama. 1:54. That’s like a year in doomsday-video time.

Hanging the end or the world (or at least the end of American society) on Obama’s election was a popular pastime for separatists, racists, and straight-up crackpots – and quite a few folks would fit into a Venn-diagram overlap between those groups. Obama’s re-election gave those theorists a do-over.

(If you haven’t heard the term “Barackalypse”, well, you have now.
There’s a whole industry catering to end-of-the-world types, and they love this sort of thing. There's big money in fear, and Obama's two elections have pushed the prepper industry into overdrive.)

You say tomato, I say agent of evil

This April 2014 doomsday video shoehorns in the Obama-is-Muslim meme, referring to him as the Mahdi (a sort of Islamic messiah, in simplest terms; possibly even an import from Christian or Jewish theology). Of course, Christian fundamentalists see this Mahdi as – you guessed it – the anti-Christ.

Go ahead and google [obama mahdi]. I dare you. I double-dare you.

At 1:07, Obama has obviously meddled with the video, since the music abruptly cuts out and we catch the doomsday theory mid-sentence, in which we are told that the USA will be “a Muslim country by the end of Obama’s second term. It is now easy to see how that can happen, and quickly.” Did you hear that? That was the entire population of the Middle East rolling their eyes at once.

Then it's back to the portentous music.

Oh! at 2:39, we get some birther action! I was wondering when that was going to show up. “Heaven help us”, indeed.

We are then told to "stock up like crazy now on 3 to 4 years worth of food and other must have items" [sic throughout]. They later misspell "survival food list", but we get the idea at this point.

The video ends with "Everyone needs to do thier own homework and pray about things that they need to be doing 'We are not financial advisors'" [sic throughout].

So then I don't have to get the Mark of the Beast to avoid losing my (admittedly meager) bank account? Okay, then.

Visiting the site's April 2014 page, I was met with a monumental wall of text, formatted for the World Wide Web of 1997.

There were several surprises, though. For example, I was not expecting to read the phrase "Telly Savalas BTW is also Jennifer Aniston's godfather.", yet there it was.

This video was produced by lasttrumpet.org, not to be confused with lasttrumpetministries.org. They don't claim to be Christian, or Jewish, or anything, really. They just really, really, really hate President Obama.

You could argue with a religious-doomsday theorist about the merits of using the Bible as proof of future events, but it would not be a constructive use of your time. You know who else was a self-styled expert? Harold Camping. How did his three separate doomsday predictions work out? You’re here reading this, which should serve as the answer to that question.

One thing I agree with in that video: April 2014 will be here soon. Here in Beautiful BC, it's late in the ski season.

Our future robot overlords find the notion of doomsday predictions to be hilarious. I visited them. They’re gonna hook me up with a cushy office job with no day-to-day responsibilities. Maybe I’ll put in a good word for you if you go easy on the end-of-the-world stuff.

Perhaps we're attracted to doomsday predictions for the same reason we're so into zombies. The idea of resetting the world back to zero, eliminating the complications of modern life as well as the fallout from the choices we've made, is a pretty compelling one. 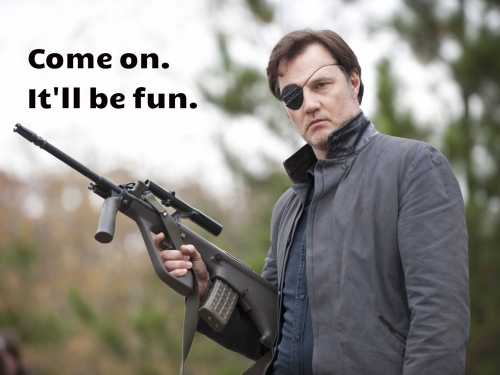 The Global Financial Crisis showed us that we're sitting atop a house of cards, which gives the end-of-society predictions that sheen of plausibility.

Okay, let's see how "April 2014 the appearing of the anti-christ and who it will be" does on our apocalypse scorecard. I promise I did not just make this scorecard up ten seconds ago; I'm an expert.

So, five out of seven. That's not bad. No mention of things like climate change, though, as threats to the established economic or political order.

Not to rain on the Last Trumpet's parade, but Busta Rhymes had the best doomsday video of all time.