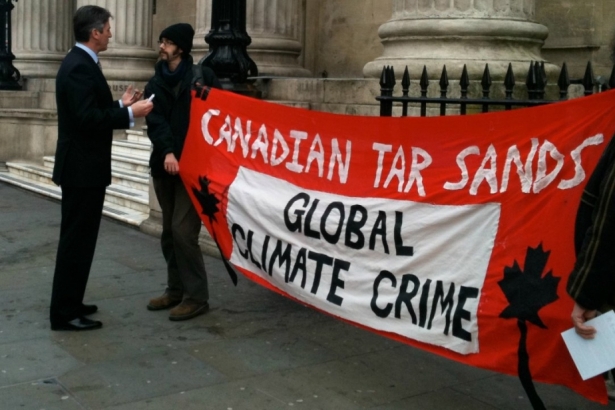 Photo from Tar Sands in Focus

It was several days before media reports and commentary on the havoc caused by typhoon Haiyan in the Philippines finally began to acknowledge a possible connection to anthropogenic climate change. While no single hyper-storm can be positively attributed to human disruption of the global climate system, climate models predict that extreme weather events will increase in frequency and violence. Unprecedented natural maelstroms like Haiyan provide empirical evidence that the models are likely correct.

What continues to be almost entirely missing from media analysis is Canada’s role in all this, particularly the moral dimensions of the nation’s current economic development policies and those of several provinces (e.g., BC, Alberta, Saskatchewan, Newfoundland). The facts, from Washington's Center for Strategic and International Studies, are that:

1) on a per capita basis, historically and at present, Canada stands among the world’s top greenhouse gas (GHG) emitters particularly of carbon dioxide (CO2). Canadians are therefore as responsible as anyone else on Earth for human-induced global warming. (To argue that as a nation our emissions are only 2-3 per cent of the global total is specious, essentially a form of denial);

2) the Federal government and several provinces have hitched their economic wagons largely to petroleum, natural gas and coal development/exports. In short, the nation’s economic future is tied, as  a matter of deliberate policy, to the country becoming a major exporter of potentially catastrophic climate change. (To argue that Canada’s shale gas and tar-sands crude is greener or more ‘ethical’ than the alternatives is laughably ludricrous.)

Source: The Age of Consequences: The Foreign Policy and National Security Implications of Global Climate Change.

This is an extraordinary state of affairs—would a thoughtful, well-informed, morally responsible people intentionally commit to an economic development path that will almost certainly contribute to accelerating climate disruption, global food shortages, ecological violence against the chronically impoverished, the physical displacement of hundreds of millions (billions?) of innocent people and generalized geopolitical chaos, possibly within their own lifetimes? (All of these things have been identified as likely outcomes of current trends in numerous graphic reports prepared by various high-level institutions ranging from national security think-tanks to the World Bank.)1 because viable alternative economic development strategies are possible.

In this light, is it not time that we had a nation-wide adult conversation about just what is going on here? How could the media report, with apparent pride, Canada’s military and civil contributions to humanitarian rescue efforts in the Philippines while ignoring our nation’s commitment to ensuring that present disasters are mere prelude to greater future catastrophe? To remain in denial about Canada’s contribution to climate change constitutes silent defence of economic policies that will permanently disrupt natural systems, injure or kill millions of people, and undermine prospects for global civilization.

The Criminal Code (Section 219) is even clearer that lack of intent to harm is no defence if the damage results from conscious acts performed in careless disregard for others: "Everyone is criminally negligent who (a) in doing anything, or (b) in omitting to do anything that it is his duty to do, shows wanton or reckless disregard for the lives or safety of other persons” (where “duty” means a duty imposed by law). Indeed, “a person commits homicide when, directly or indirectly, by any means, he causes the death of a human being, by being negligent.”

The fact that Canada is not the only offending nation would be no defence. All participating members are guilty of crimes committed by a criminal gang.

Of course, Canadian law does not apply in the international arena and, in the absence of a corresponding negligence framework, international law imposes no legal duty to act responsibly. That said, there is no prima facie reason why the behavioural standards we impose on ourselves as global citizens should not be as rigorous as those we accept at home under domestic law.

If human-induced climate change is the cause of death and destruction, is not Canada’s failure to reduce its CO2 emissions at least morally negligent? Does not the conscious pursuit of economic policies that actually exacerbate climate change display “wanton or reckless disregard for the lives or safety of other persons,” particularly so if alternative paths are available?

Point: Canada’s stance on climate change arguably constitutes gross moral negligence. In light of global change, our current economic development model is fatally flawed. The nation deserves a rigorous public discussion of both these issues in Parliament and in the national media. Without such debate, we cannot act like the thoughtful, well- informed, morally responsible people we hope (pretend?) to be.