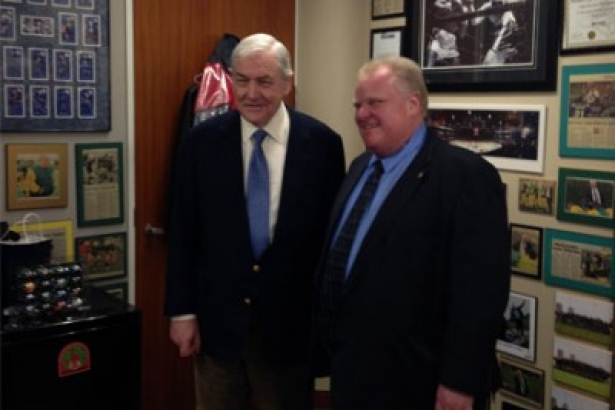 Readers outside of Toronto are seriously deprived of late of a huge dose of comedic entertainment. It comes via Conrad Black, aka Baron Black of Crossharbour, and the fallout from his fawning interview last week with the disgraced mayor of Toronto, Rob Ford.

The interview took place on the weekly interview program that Black co-hosts on Vision TV called The Zoomer. He calls the interview a "civilised conversation". Black lobbed puffball questions for the mayor to smoothly answer. The headline of a column by Toronto Star reporter Rosie DiManno (link below) summed up the exchange, titling it, ‘Two fools in a room’.

Black is a former media baron, life peer in the UK and a convicted felon in U.S. courts. He returned to live in Canada last year.

He was called to task over the Ford interview in an interview with Carole Off on CBC Radio’s As It Happens on Dec. 11. The baron put in a painful performance in defending his “conversation” with Ford as his unique form of journalism (text and audio here).

“The Zoomer is not about being apologetic. It will be groundbreaking, intelligent, and hard-hitting discussion on how our growing demographic is changing Canada and the world culturally, socially, politically, economically.“The issues go the core of how our society will function in the decades ahead,” said [co-host] Denise [Donlon] in a recent editorial meeting.

It turns out that Black did his mayor friend no favours by conducting the “conversation” on his program because he managed to draw from Ford a suggestion that Toronto Star reporter Daniel Dale is a pedophile. That stems from Dale's investigation for the Star in May 2012 of Ford’s attempt to purchase some city-owned land so that he could expand his back yard. Dale is suing the mayor and by all account has a solid case (see links to that story below).*

The baron just doesn't learn. Now he has published a commentary in the National Post in which he defends the mayor forcefully. He terms Ford's conduct and associations “embarrassing and improper incidents and utterances”. He calls the lengthy news coverage of Ford by the Toronto Star an attempt to “end-run the electoral system” and to “stage a coup”. The paper's coverage is “a menace to democracy”.

Black was appointed to a lifetime peerage in the UK by Tony Blair (you can't make this stuff up) in 2001. At the time, then-Prime Minister Jean Chrétien sought a constitutional opinion and it confirmed that a Canadian cannot accept an appointment to a foreign government and still retain his citizenship. So Black renounced his Canadian citizenship, saying in his au revoir that Canada under the Liberals had become a two-bit country that he was better off without.

That decision came back to haunt Black following his release from prison in the U.S. in 2012 because in the eyes of Canada's law ‘n order government, a non-citizen with a criminal record would typically be refused permission to reside in Canada. Heck, citizens are being refused that right, eg Omar Khadr. But we all knew how that would work out for the baron. He is comfortably returned to his mansion in Toronto, which he shares with his right-wing columnist wife, Barbara Amiel.

Flaherty has tears of solidarity for Rob Ford, nothing for impoverished pensioners

Toronto Pride parade draws a million revellers. Mayor Rob Ford was not one of them.