A big week for fossil fuel politics in British Columbia 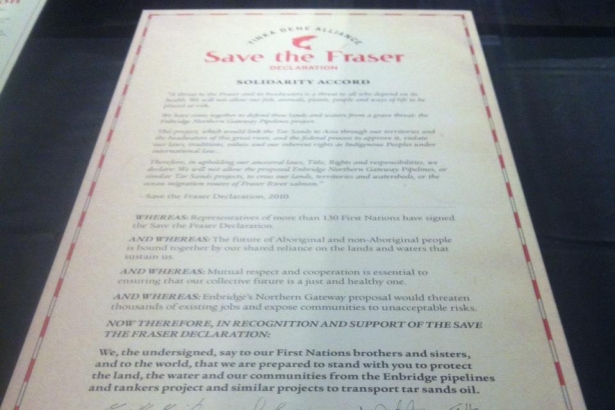 Two important events hit the headlines last week concerning the future of fossil fuel projects in British Columbia. One was the release on Dec. 5 of the report by Special Federal Representative Douglas Eyford. He's the lawyer appointed earlier this year by Stephen Harper to find a way for fossil fuel projects in BC to overcome the opposition of First Nations and others.

The other was a new declaration of opposition to the Northern Gateway tar sands pipeline by a number of environmental organizations, trade unions, other organizations and several elected politicians. The declaration is in solidarity with First Nations, specifically in support of the Save the Fraser Declaration first issued by First Nations in 2010. More than 130 First Nations in British Columbia and the northern Canadian territory of Yukon have signed onto the Save the Fraser Declaration.

A new website and online petition that reaffirms opposition to Northern Gateway is named ‘Hold the Wall’. Among the signatories to it at the Dec. 5 ceremony were the BC Teachers Federation, Unifor union, Council of Canadians, BC Wilderness Tourism Association, Canadian Association of Physicians for the Environment and the David Suzuki Foundation.

A new cooptation approach by the federal government

Douglas Eyford's appointment and report are an implicit recognition by the federal government of its failure, together with Enbridge Inc, in bullying through the Northern Gateway pipeline. Their pro-pipeline efforts have been laced with epithets labeling Northern Gateway opponents as ‘foreign-financed’ and ‘radicals’ and have only served to boost opposition to the line.

CBC News reports, “Eyford’s report is the second step in helping advance Harper’s stated goal of turning Canada into an ‘energy superpower’.’’ The first step has been cultivating markets in Asia for Canada’s fossil fuel resources. The BC and federal governments have been working that end of the street intensively. Premier Christy Clark has just returned from a lengthy promotion tour in China.

Eyford recommends an intensely consultative process with First Nations in place of the failed bullying. That approach has already scored success with support for the vast gas fracking and liquefied natural gas plans in the north of the province.

Meanwhile, attention is rising over the plans of Kinder Morgan to expand its existing Trans Mountain Pipeline. The company would build a new line to carry tar sands bitumen in, approximately, double the quantity of the refined and light crude oil that presently flows. The new line would follow the existing route in places, but divergences from that as well as the scale of expansion where the route would be unchanged make it, for all intents and purposes, a new pipeline.

According to AJ Klein of the PIPE UP Network, awareness and opposition to the Trans Mountain pipeline is growing by leaps and bounds in the Fraser Valley and further east along the proposed route.

"The outpouring of concern in the Fraser Valley over Kinder Morgan’s new pipeline is significant. These aren't so-called radicals--they are people from all walks of life who understand that in this day and age, building another pipeline just doesn't make sense,” she told the Observer.