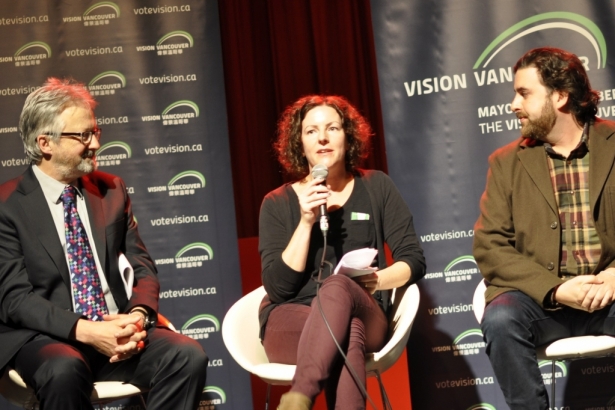 We had gathered at the Fox to talk about keeping Vancouver's cultural spaces alive and thriving. "Protecting Vancouver’s Cultural Spaces: How we can preserve culture in a growing city" was a Vision Vancouver-sponsored event at which a panel and members of the public could take the pulse of Vancouver's cultural scene –– yes, we have one –– and discuss what was healthy and what was in need of intensive care.

The main takeaways were that production and rehearsal space are as valuable as performance space; the affordability crisis is threatening Vancouver's cultural future; and we need to identify and activate non-standard arts spaces.

Melissa Fong was live-tweeting next to me, and familiar faces from Vancouver's creative scenes dotted the crowd.

When we talk about preserving culture, we must do so with the understanding that the arts are not under attack from space aliens: we create many of these barriers ourselves. Affordability and red tape were the two biggest predators identified during the event.

Meggs said that the City owns 56 cultural spaces, but its current focus is not on buying new property; rather, it wants to support existing arts organizations.

Meggs lamented, "We understand that there's not enough of anything, there's particularly not enough money, and that income for artists are at rock bottom." 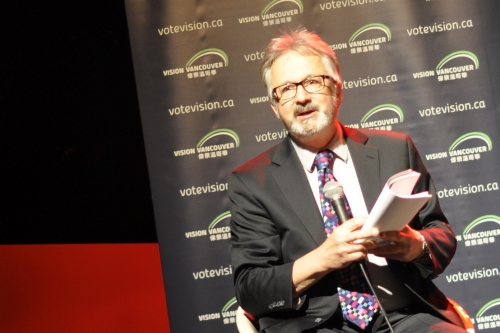 He said, "We don't have a massive inventory of old warehouse space" like Montreal and Toronto do.

Speaking to that issue, Rausenberg said that Vancouver doesn't have the spaces it needs to produce art: "We don't have proper space for storage, for rehearsal, or for the creation and development of our work." 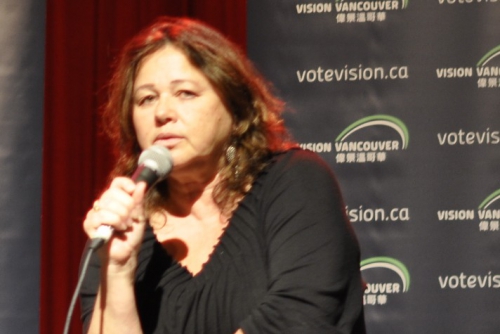 Art is messy and loud. Your landlord is unlikely to be cool with your turning your apartment into a painting studio, and will definitely not be cool with your metal band rehearsing in your 100-square-foot living room.

While pointing out that the food cart festival, which uses public space, was a win for the city (because food is art); Gomez jabbed right to the heart of the issue:

"Rampant development has really left us without lots of affordable space to live and to work in."

"A strong, decisive move from administration" is needed, he added: "We have to preserve buildings and spaces the same way we preserve parks and trees."

Another thing that's not working, said Gomez, is that our permit and by-law structures are too byzantine. Artists must be able to "play by simpler rules" than do developers, he said.

Armstrong was thinking more analytically about how we compare ourselves to other cities. While programs like Field House are good starts, but "where are our next five examples?"

Vancouver is a very young city, and we know we aren't on the same track as New York, Berlin, Melbourne, or Paris. Armstrong said, "Just trying to get out in front of some of these issues and questions. One of the things that happens here is a bit of chasing the crisis."

Armstrong said that the City knows how to "plant a flag in the ground" around something like sustainability or digital industry, but we've not yet done that for culture: "There's a way that a city has to declare its predominant values in an area in order to leverage all the things it has available to it." Things like funding, advocacy, and visiblity.

Rausenberg, who is "really into studio spaces", noted that Toronto has done a good job with securing live-work and creation spaces. Those "starving-artist" lofts like you see in the movies are not as plentiful as Hollywood suggests.