Five reasons to get behind NDP's Thomas Mulcair

Thomas Mulcair is the NDP’s only shot at defeating Harper, and his aggressive attitude may just be what’s needed to stand up to bullies in Ottawa. 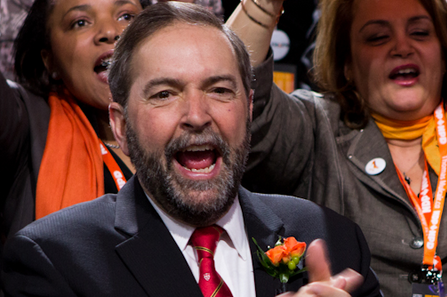 Thomas Mulcair conjures up a lot of strong words and sentiments among NDP members and the press. Words like "pit bull" and "attack dog" stalk his political career, and Macleans magazine described him as "Mr. Angry" -- probably a good thing, given the current feeling among Canadian progressives against Prime Minister Stephen Harper.

A political blue-blood (descended from Quebec premier Honoré Mercier) from a 10-child household, the brazen, bearded and fully bilingual Mulcair was praised by NDP MP Don Davies as the one candidate who's got “prime ministerial bearing.”

He may be a change from "smiling Jack" Layton, but he's the undisputed NDP leader now.

Here are five good reasons he should have the party's support.

1) He's the NDP's only shot at defeating Harper

Party members across the country voted for a leader, and Mulcair came out on top. One member, one vote—it's a fair system, and assuming the vote website's hacker problem didn't affect the outcome, he's the fair winner.

Mulcair's goal is the same as every other New Democrat's: to get Stephen Harper out of office. And he can only succeed if he gets the full support of NDP backers, and then some from non-Conservative parties including the Liberals, Greens and the Bloc.

While some people fear that he's going to bring the NDP to the centre, his outward goal is to bring the centre to the NDP. With his credentials as a former Liberal, a former environment minister and a staunch Quebecer, it's possible.

One thing is for sure: Mulcair is not afraid of battle. His fighting spirit and "Irish temper" is something that has marked him throughout his history as a lawyer and Quebec cabinet minister, right up to the NDP race. And given the Harper government’s aggressive tactics, Mulcair's scrappy “warrior” attitude may be one of the only ways to strike back at Conservative bullies in Ottawa.

“If you want to play with the big boys, you choose a guy who can fight,” said one supporter in his home riding of Outremont, Quebec.

And Mulcair’s supporters aren’t the only ones talking about his aggressive persona. Northern Ontario MP Charlie Angus told CBC News on Sunday that MPs should “rally around Mulcair, who he described as Layton’s ‘pitbull’ in Parliament.”

NDP MP Don Davies also provided a shining endorsement in a recent Maclean’s article, describing Mulcair as passionate, principled and “not afraid to speak his mind”.

“I think that’s something that our party will benefit from…a bit of a hard-nosed approach to take on Harper. Because I think Canadians want that as well,” said Davies.

In the Globe and Mail, reporters commented that Mulcair’s nickname of “Grizzly” has as much to do with his impressive facial hair as for his “penchant for constant, trenchant attacks” on his opponents.

And the Toronto Star’s Tim Harper noted Mulcair’s claims about handling himself well in a “rough-and-tumble” Quebec neighbourhood—something the politician says will serve him well on the hill.

“He laughed about how the Conservatives couldn’t call him anything he hadn’t been called by his siblings,” he wrote.

In the days since his victory, Mulcair has been focused on presenting a strong, united front with the rest of the party. He promised “continuity” throughout his transition into the top spot, and told the caucus that his team would primarily consist of familiar NDP faces. He even extended an “olive branch” to Vancouver East MP Libby Davies, keeping her on as deputy leader despite tensions between them.