Grand Theft Auto, Vancouver riots, and the deficit of the real

Sports riots have been recorded from as far back as Roman times and have more to do with tribal rivalry than anything intrinsic to specific games....There are parallels also with computer gaming, though it would be too simplistic to call it a cause. One wonders if the ubiquitous Grand Theft Auto trope of flames and pixelated blood spatter against the backdrop of a burned out city has so thoroughly colonized the optical subconscious that it now seems natural somehow, even reassuring, a kind of default habitat where young men in particular are used to operating.

J.G. Ballard would have loved Vancouver's Stanley Cup riot. In fact he consistently imagined situations like this (and worse) in his dystopian novels and short fiction.

In his novella Running Wild, the children in a gated community of middle class professionals band together and slaughter their parents within the tasteful grounds and interiors of their designer homes. In High Rise, the residents of a luxury apartment tower wage tribal warfare against rival floors in an effort to alleviate the boredom of their cosseted and privileged lives. 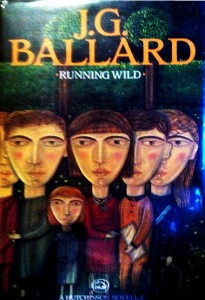 My copy of 'Running Wild'

“Unable to express their own emotions or respond to those of people around them, suffocated under a mantle of praise and encouragement, they were trapped forever in a perfect universe. In such a society, madness is the only freedom.”

In many ways Vancouver’s hockey riot was likewise an expression of raging bourgeoise ferality; essentially, a riot about nothing – a ‘Seinfeld’ of riots to which it is a mistake to ascribe any political motive. In the wake of the play-off defeat, with the Canucks scoring ‘zero,’ something had to take the place of that nothing even if that something was pointless violence. At least that could be remembered, tweeted and socially networked. To read any more into this is to be mistaken, yet for me, the underlying message is clear:

Beware of the middle class.

Especially its young men. For they exist increasingly in a state that could be described as a deficit of the real, which is dangerous and unstable place, full of unfocused outrage and an overdeveloped sense of personal entitlement that constantly simmers just below the surface. The riot wasn’t a conspiracy of any kind but rather the lack of one – a set of preconditions where a massive charge of nothingness had accumulated to which the riot was an almost electrical response; the closing of a circuit to the unmet expectations of an ontologically bereft, predominantly suburban, mob. With the loss of the game, the value of the Canuck brand (temporarily) evaporated for them, triggering a wave of buyer’s remorse through the hyped-up expectations of the crowd. In the brutal logic of the situation, the outpouring of rage had to be taken out on the city itself, the brand’s associative container. In that sense the ubiquitous slogan: ‘We are all Canucks,’ proved truer than it needed to be.

The ensuing riot and looting were pure reification, a desperate desire to wrest meaning from the void, to be part of an authentically ‘real’ experience outside the purview of the corporate machine that had so spectacularly failed to deliver. No matter how one feels about it, the hockey riot unarguably ‘happened,’ the physicality of its burned-out automobiles and pillaged storefronts comprising an iconic collective experience that will be remembered for a long time to come, despite the almost immediate attempts by civic boosters to re-narrative-ize it by drawing media attention to isolated acts of heroism and the bonhomie of those engaged in the clean up effort.