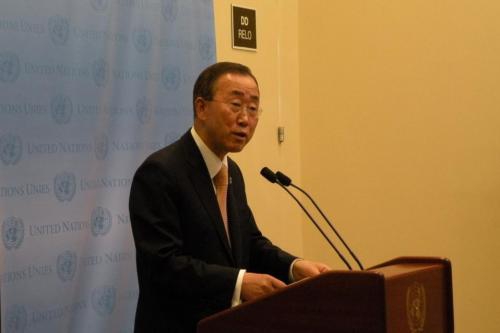 Ban Kim-Moon, Secretary General, United Nations, speaking at the first scheduled press conference Sept 22, 2010, where he stated his commitment to the MDG's and accepted the long-road ahead toward justice for women. Diane Walsh photo.

Gender justice was a focus at the UN Summit on the progress of the Millennium Development Goals (MDGs) last week in New York. A promise was made to address the issue of female genital mutilation (FGM) by newly appointed Secretary General to UN Women Michelle Bachelet, former President of Chile.

In an unfunded exclusive this reporter attended the tightly secured UN headquarters to listen to, meet and interview politicians, representatives and administrators from around the world on behalf of independent media to report on the progress towards the criminalization of FGM - sometimes referred to as female genital cutting or female circumcision.

The message this reporter took from the UN summit experience is this: that now aid must be provided to ‘UN Women’ to perform the long awaited mission - to criminalize FGM.  On the brink of a resolution against FGM, it does seem true that all hands must be connected in this endeavour.

My presence at the conference was a sign of imagination for local publishers in looking outside our usual BC news context.  No longer relying on packet streams from monopolistic news generators and instead now relying on ‘one of their own on the inside’ for first-hand reporting.  At the same time it’s a sign of significant progress that the UN welcomes foreign correspondents from all media, without favour to the famous and loud, and with respect to regional, specialized independents.

With space provided me, I was present at the 8th Secretary-General of the United Nations Ban Ki-Moon’s summation remarks where he confirmed the goals of this Millennium Summit.  I was impressed to hear his specific emphasis on gender justice.

The Secretary General sincerely commited the UN to making progress to end world poverty and conflict and explicitly stated a commitment to women. However, the agenda of the United Nations has always been ambitious and the organization often falls short in reaching its goals.

But the UN is first and foremost a reflection of its member nations.

This year, there seems to be a seismic shift - a new energy present.

For one thing, the topic of female genital mutilation is moving into the mainstream context of global poverty. US President Obama’s presence was electrifying of course, seen with his usual confident smile before making his speech where he, too, vowed his commitment to help end suffering. 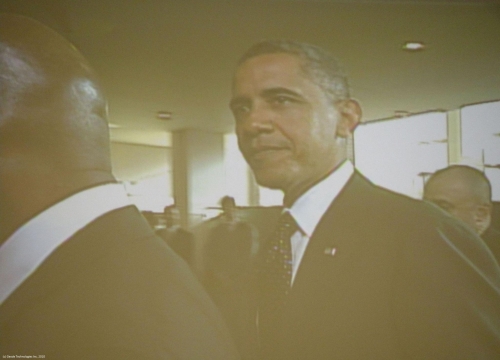 As I moved from meeting to meeting, and journalism scrum to press conference, I came to realize that our image of the UN is really no mirage.  It is truly a place where the nations of the world can represent their national interests in a unique public forum. Criticism is harsh and positions often bizarre and irrationally political. But in the enduring words of England’s war-time Prime Minister – ‘Better Jaw Jaw than War War’.

It struck me that if we round up the usual suspects on the ‘War War’ side, we find our western world much too prominent.

In upcoming articles I will describe some of the meetings I had with senior administrators of FGM programmes particularly active in seeking to eradicate abuse. Embargoed information doesn’t permit publishing full reports at this time. We will publish the second part of the FGM series shortly. 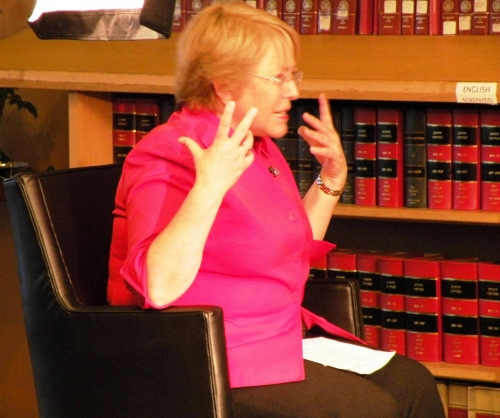 Ms. Michelle Bachelet, Head of UN Women, sitting down for her first interview on the job, with Nathan King of France 24. Diane Walsh photo.

What I can say is that I witnessed the newly appointed Secretary General to UN Women, Michelle Bachelet, former President of Chile, speaking unequivocally about the importance of women’s rights and stating her promise to address the problem of FGM, full-throttle.

I discovered that although sponsorship and support is active, more is needed to step up the fight. More mobilization is now occurring with the aim to better assist afflicted women and girls at the ground level and to educate the public and western leaders about the terrible crimes being committed in the practice of FGM.

The practice is far reaching and is creeping, quietly, into western culture. It’s a health hazard and an intolerable abuse.

In my reports I will show how our present Canadian government, led by PM Stephen Harper, has surprised and disappointed the world health community, with its dangerous and ideological policies, inflicting avoidable suffering on so many people.

As a Canadian reporter, discovering that Canada’s reputation as a progressive and civilized nation is under threat, is disturbing. My reports will describe what can be done to recover and restore Canada’s positive contribution.

Vancouver, as part of British Columbia, is a mini UN just as it is part of the even greater cultural landscape. Many creeds, religions and beliefs are represented in our population and in our Legislative Assemblies and Parliament. Our populace will absorb increasing immigration in the next decade and because of that it is critical that we educate our children against harmful traditional practices including FGM and seize every opportunity to understand the legitimate practices and ambitions of the nations of the world around us.

The UN, with all its limitations, is deserving of the continued constructive support of Canada and my future reports will, I hope, identify where we can be most welcome and effective.

You can listen to the webcast on Bachelet’s groundbreaking appointment by Secretary General Ban Ki-Moon to head UN Women and watch the first interview after the appoinment.

On the frontlines of the fight against female genital mutilation