The following is a letter sent by Canadian citizen, international investment law expert and law professor Gus Van Harten to Canadian Prime Minister Stephen Harper and the Minister of International Trade Ed Fast on October 12, outlining his concerns about the Canada-China Foreign Investment Promotion and Protection Act (FIPPA) which will come into effect at the end of October, pending no constitutional challenge or public outcry. As of its publication neither the Prime Minister nor the Minister's offices have confirmed whether Harper or Fast have received and read this letter. 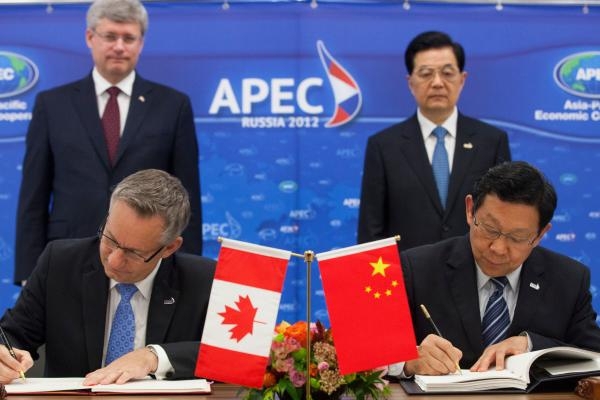 I am an expert in investment treaties. As a Canadian, I am deeply concerned about the implications for Canada of the Canada-China investment treaty. As I understand, the treaty is slated for ratification by your government on or about October 31. I hope you will reconsider this course of action for these reasons.

1. The legal consequences of the treaty will be irreversible by any Canadian court, legislature or other decision-maker for 31 years after the treaty is given effect. The treaty has a 15-year minimum term, requires one year’s notice prior to termination, and adds another 15-years of treaty coverage for assets that are Chinese-owned at the time of termination. By contrast, NAFTA for example can be terminated on 6-months notice.

2. Other investment treaties (aka FIPAs) signed by Canada have a similar duration and, in this respect, are exceptional among modern treaties. Yet none put Canada primarily in the capital-importing position. As such, the Canada-China treaty effectively concedes legislative and judicial elements of our sovereignty in a way that other FIPAs do not. Chinese asset-owners in Canada will be able, at their option, to challenge Canadian legislative, executive, or judicial decisions outside of the Canadian legal system and Canadian courts.

3. To elaborate, the treaty will likely be largely de facto non-reciprocal due to anticipated in-flows of Chinese investment to Canada outstripping Canadian investment in China. The deal gives Cadillac legal status to Canadian investors in China and vice versa. Yet Canada will be much more exposed to claims and corresponding constraints as a result of the de facto non-reciprocity. Two awards of a billion dollars-plus, and many over $100 million, have been issued against countries to date under these treaties, with more likely on the way. The awards are immune from judicial review, largely or entirely, and are often extra-territorial, depending on how the investor's lawyers frame the claim.

4. Usually, the capital-importing position under these treaties is occupied by a developing or transition economy. Under the Canada-China treaty it is occupied by Canada. This poses a serious fiscal risk. Notably, to sue under the treaty, a Chinese company requires only a minority share in any Canadian enterprise or other asset in Canada. Based on interpretations by arbitrators in numerous cases, a Chinese investor could obtain, or may already have obtained, ownership in Canadian assets via a holding company in a secrecy jurisdiction such as the Cayman Islands, without losing its right to sue under the Canada-China treaty. What steps have you taken to ensure that there is not now and will not be in future Chinese-ownership of assets of which the government is unaware?

5. The only comparator for Canada in terms of fiscal risk is NAFTA. Canada has been sued about 30 times under NAFTA Chapter 11 although many cases were minor. Canada has paid out around $170 million in compensation in four cases to date. Other countries have been ordered to pay much more. Our biggest loss apparently came last May in a claim by Mobil Oil/ Murphy Oil involving R&D expenditure requirements in the Hibernia and Terra Nova projects. To my knowledge, a damages award has not yet been issued in that case although Canada was found by the arbitrators to have violated NAFTA. The decision reportedly undermined Canada's standard approach to reservations in investment treaties with potential implications for the Canada-China treaty. It is not possible to confirm this because your government has not released the Mobil/ Murphy award against Canada in spite of your commitment to openness in these arbitrations. Would you please send me a copy of this award?

6. This heightens my concern that you have, in the Canada-China treaty, retained the right of the federal government not to release documents filed in Chinese investor lawsuits against Canada under the treaty if the government deems it not "in the public interest" to do so. This is not consistent with longstanding Canadian government policy to make such documents, and the arbitration hearings, public as a matter of course. If you intend to release the documents in any event, then why have you retained the right not to do so in the treaty? Other Canadian FIPAs state very clearly that all of the documents will be made public.

(Link to op-ed in The Star: Canada-China investment deal allows for confidential lawsuits against Canada)