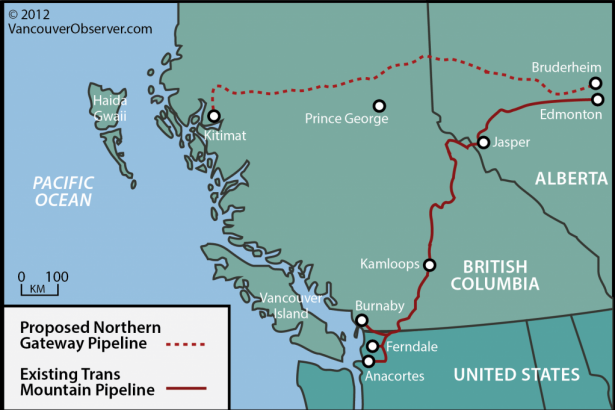 "Well, look who just caught up. Premier Clark is right that we need to stand up to Alberta's aggressive oil agenda, but selling our coasts and rivers out from under us is not the way to do it," Phillip said in a release.

"First Nations right across BC have vowed we will never allow Enbridge's pipeline and tankers, and non-Natives are united with us in a growing groundswell of unity to protect all of us from oil spills." Premier Clark should take "decisive action" in opposing heavy oil pipeline and tanker projects, he said.

Phillip was joined by former federal Minister of the Environment David Anderson and Prince Rupert City Councillor Jennifer Rice. They called for the rejection of Enbridge Inc.'s Northern Gateway pipeline and tanker proposal following a US-Canada Enbridge pipeline oil leak of over 1,200 barrels (more than 190,000 litres) in Wisconsin over the weekend.

The Northern Gateway is a 1,177 km dual pipeline project transporting 525,000 barrels of heavy oil per day between Edmonton, AB to Kitimat, BC. The project is a proposal from Calgary-based Enbridge Inc., a company specializing in crude oil and liquids pipelines, natural gas transportation and distribution, and green energy.

Over 100 First Nations have banned tar sands pipelines and tankers from their traditional territories.

"Protecting our salmon streams and our ocean coast from oil spills is not negotiable," said former BC Liberal Leader and former federal Minister of the Environment David Anderson. "No amount of money can protect our coast, and no amount of money can repair the damage of a spill of heavy Alberta crude oil...Premier Clark should make that clear to the Alberta and federal governments, and then move on to negotiating a Canadian National Energy Strategy based not on increasing production and consumption, but on the fundamental need to reduce greenhouse gas emissions from all Canadian sources."

Anderson cited Enbridge's poor record on environmental and worker safety as the main reason to reject the Northern Gateway project. The US National Transportation Safety Board released a scathing report in early July about Enbridge's handling of a 2010 oil spill in Michigan, calling the company's employees incompetent and stating that the company had a "deviant" culture around safety procedures.

In May and June there were three major heavy oil pipeline spills in Alberta, causing the government to admit that there were issues, and start a pipeline safety review.

Coast and communities are not for sale, says Prince Rupert city councillor

"British Columbians have made clear that our coast and our communities are not for sale," said Jennifer Rice, a city councillor in Prince Rupert. "Our issue isn't the money - it's about risking our fishing and tourism economies for oil tankers and pipelines."

The Prince Rupert city council, and other government bodies such as the City of Terrace, Town of Smithers and the Skeena Queen Charlotte Regional District, (which includes the communities on Haida Gwaii), have passed similar resolutions opposing the pipeline.

"The government's pipeline pre-conditions will not protect BC from oil spills, as evidenced by Enbridge's latest spill, just three days ago," said environmental lawyer Josh Paterson of the West Coast Environmental Law Association.

"As the premier has recognized, government pipeline and tanker safety requirements can't eliminate the risk of pipeline ruptures or ship accidents. That's why so many people in BC have said we won't accept oil tankers and pipelines under any conditions."