The Kill Bill star went to jail with a 78-year-old great-grandmother for 'trespassing' in protest against Keystone XL pipeline construction. 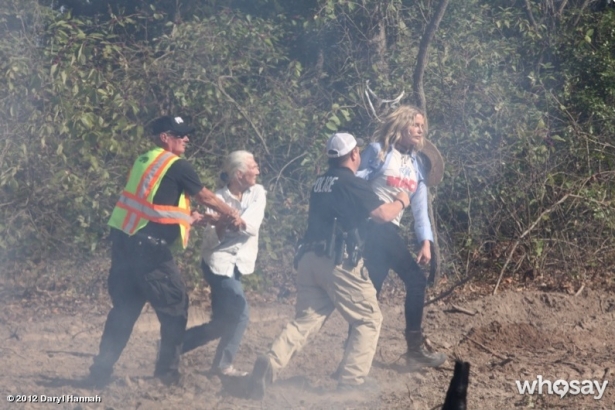 Daryl Hannah (right) and Eleanor Fairchild (left) in an altercation with security guards in anti-Keystone XL pipeline protest in Texas.

Seventy-eight-year-old great-grandmother Eleanor Fairchild did not know of Hollywood actress Daryl Hannah before the two were jailed in Wood County, Texas together Thursday for protesting the Keystone XL pipeline construction in Fairchild's backyard.

“I just met her, I didn't even know her from Adam. I didn't know her movies,” Fairchild said of her cellmate.

The two had stood before heavy construction equipment on Fairchild's land in Winnsboro, in the East of the Lone Star State, where TransCanada is constructing part of a $7 billion pipeline to bring the Alberta tar sands' non-conventional oil to the US' Gulf Coast.

Hannah and Fairchild both told The Vancouver Observer they did not expect to get arrested.

Hannah was staying at Fairchild's 90-acre farm as part of her ongoing advocacy against the pipeline and a forthcoming documentary about the individual US landowners the pipeline's construction has affected.

“I woke up to get coffee. Eleanor was in the kitchen. We heard the machines beeping and saw black smoke billowing, and we said enough. It was a sudden moment of inspiration and frustration,” Hannah said, hours after the two were released with criminal charges including trespassing.

“It's most ridiculous that she was arrested for trespassing on her own land. That would piss off most Texans,” Hannah added, laughing.

Fairchild may not have planned to land herself in jail, but she calls this a success in her drive to draw attention to the pipeline since the “media doesn't cover it like they should.”

The protest “felt good, because I was making a statement I thought was right,” said Fairchild, “We did very well, thank you.”

“In '04, I started fighting the pipeline... My land is being devastated. TransCanada is bullies. They push people around, intimidate them and scare them,” she said.

Hannah said that her own wrist was injured by security guards from a third party company hired by TransCanada during their protest.

“Many people who have been fighting [the pipeline construction] have been slapped with gag orders, slapped with lawsuits,” Hannah said, accusing TransCanada of “bullying people and making them feel isolated.”

Both Hannah and Fairchild are opposed to the transport of Canadian bitumen to the US.

“The pipeline is coming a mile through my land... I started finding out what tar sands are, and I don't think they should be in the United States,” Fairchild said.

“Oil and tar sands are two different things -- They don't take all that sand out of it before they send it through that pipeline,” she added, explaining, “I'm a farmer - it takes equipment only a little time to wear holes when dealing with sand.”

Fairchild noted that her husband worked in the oil industry for 50 years, and was senior vice president of a Texas oil company.

Hannah agreed with Fairchild, saying that the great-grandmother of five “doesn't want that toxic, corrosive substance going through her property.”

Still, TransCanada disagrees that Canadian bitumen is different from any other oil.

“Oil is oil, and despite rhetoric from professional activists, our society will rely on fossil fuels for decades to come,” said TransCanada spokesman Shawn Howard in a statement emailed to The Vancouver Observer.

“On the issue of eminent domain, it’s important to remember that TransCanada is not taking property away from a private landowner. We acquire an easement – similar to a water, sewer or utility line that runs through most of our properties. The pipeline, like utilities we rely on, is buried but ownership of the property never changes hands and the landowner maintains the economic rights to the surface,” he added.

Hannah and Fairchild maintain that Fairchild still pays taxes on the easement between her land and the pipeline construction, and that it is unfair that she has been blocked from entering or planting around it.

“These are aggravating people,” Fairchild said, “They are horrible.”

The war of words came from both sides of the disputed easement.

“It is unfortunate Ms. Hannah and other out-of -state activists have chosen to break the law and tie up scarce law enforcement resources to deal with these matters. TransCanada, like American companies operating in Canada, has the legal authority to build this pipeline under Texas state law,” said TransCanada's Howard.

Hannah pointed out that although US President Barack Obama denied TransCanada the permit for the pipeline to cross the US-Canada border in January, connections between Washington and TransCanada are enabling the continued construction of the disputed crude link.

A few words for Canada

Hannah said that despite her arrest, she won't back down.

“There's no bottom line for corporations and governments that have an agenda... In [the US], we have a long history of civil disobedience, one of the primary tools used to stand up against injustice. When a law is unjust, the only option is to break it,” she said.

“There is a very brave and bold struggle in Canada for similar issues. We are a mirror for each other... As far as I know, Canadians are doing a good job of standing up for their rights, and it's inspiring.”

Keystone XL pipeline video: "It's not us, it's you"