With NDP, Liberals and civil society groups criticizing Canada's secretive CETA agreement, VO continues our series on the pact's impact on Canadians' water, democracy, jobs and health. Part IV examines why some cities are voting against CETA - and whether Vancouver is next. 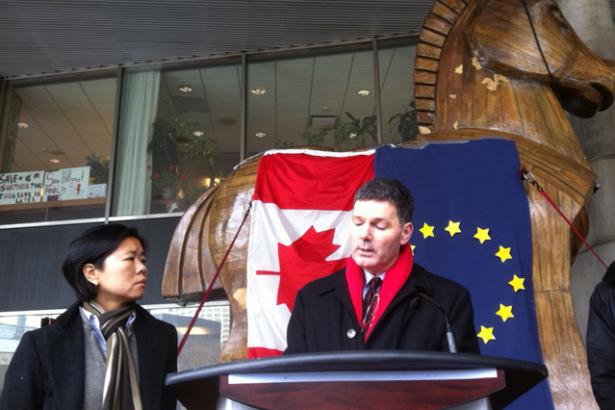 In a landmark decision for BC communities, Victoria City Council voted unanimously on May 10 to be excluded from what international trade minister Ed Fast touts as “the most ambitious trade deal” in history.

Victoria passed a motion to opt out of the Comprehensive Economic and Trade Agreement (CETA), currently in final-stage secret negotiations with Europe, only weeks after federal cabinet ministers were deployed across Canada to promote it.

“The imminence of passing the deal is pushing municipalities into a last-ditch place: if we can't be party to the deal, we don't want to be part of it,” said Victoria City Councillor Marianne Alto, who put forward the successful resolution, in an interview with the Vancouver Observer. “The federal government has been remarkably clandestine on this.

“They have not engaged, in any meaningful way, with the level of government most likely to be affected by this. . . My mom told me never sign a deal without seeing the fine print – I couldn't, in good conscience and for my residents, do that.”

The city's decision joins motions in nearly 60 municipalities across Canada, including opt-out votes in Toronto, Montreal and Hamilton, warning that CETA risks banning municipalities from enacting buy-local or hire-local policies, and potentially impinges on city contracts such as water services.

CETA and Vancouver: a need for clarity

But while the deal has raised concern amongst Vancouver's leadership, so far it has not been addressed in Council.

“We share people's worries and concerns,” said Vancouver City Councillor Tim Stevenson. “Would (CETA) encroach on any of what we hold now as our legal rights as a municipality?

“Obviously, we need to have a good trade relationship with Europe. . . But as municipalities, we're concerned about what that might mean as far as restrictions on our municipal lives.”

Stevenson emphasized that the City of Vancouver's strategy is to act in tandem with the Federation of Canadian Municipalities (FCM), of which both it and Victoria are members, in order to avoid a “go it alone” approach.

“At this point, Vancouver (has) decided not to go down the symbolic route which Toronto and Montreal did,” he said.

Stevenson – who also sits on the FCM committee addressing CETA – said that protecting water services are a top priority, as well as municipal decision-making ability. He said that, although the government has met with the FCM and offered assurances that there is nothing to fear, what cities want is to see what's actually in the deal.