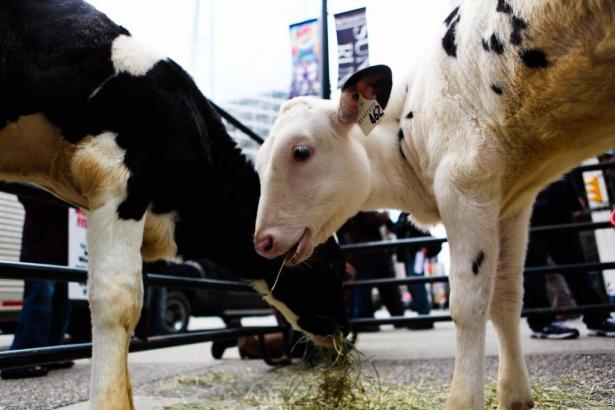 Two calves were penned at the intersection of Burrard and Pender today, as farmers backed legislation reforming the Fisheries Act. Photo by David P. Ball

For those Vancouverites still waiting for the cows to come home, today they did. Right into downtown Vancouver.

About 50 farmers - and two penned calves - from the Fraser Valley brought their concerns to the intersection of busy Burrard and Pender Streets this morning, rallying in support of reforms to the Fisheries Act which would reverse a ban on farming near artificial ditches.

The controversial reforms, which some fishing and environmental groups warn could reduce habitat protection, would enable farmers to drain their low-lying farmland and ditches, speakers said.

"We're not against species in our ditches," said Agassiz farmer Gary Wikkerink. "But I'm actually not allowed to touch that ditch, and in the rules and regulations I'm not allowed to put fertilizer 30 metres from it.

"I'm here to make known that, 'Hey, we live on low land, we bought it years ago, we're proud of it and want to grow good crops. I want to pass it on to the next generation."

Wikkerink's role in the calves' pen was to collect droppings in a red bucket.

"I have volunteered to collect the leftovers - we wouldn't want to have them on the concrete here," he said, laughing. "I have 40 cows. My milk goes to Vancouver. I've been raising animals for 35 years. . . I've always loved to do that."

The Canadian Taxpayers Federation (CTF) also presented a petition calling for an appeal process for farmers who want to dispute Department of Fisheries and Oceans directives.

"The DFO is taking this land from these farmers without any concern about their livelihoods or understanding about agriculture," said CTF BC director Jordan Bateman in a statement. "The Fisheries Act needs to be changed to reflect how vital irrigation and drainage are to farms."

But a biologist and aquatic habitat specialist at the David Suzuki Foundation (DSF), who attended the rally, told the Vancouver Observer that the farmers' concerns could be addressed without gutting the Fisheries Act, as the CTF advocates, and questioned whether the CTF was "distorting" the agriculture sector's message.

"The message the farmers had was, 'Let us clean our ditches and drain the land,' said John Werring, with the DSF's Marine and Freshwater Conservation Program. "They're saying they're not being allowed to do it because of the Fisheries Act. It's a grossly distorted message.

"The solution is not to do a wholesale amendment of the Fisheries Act that guts remaining protections for fish habitat. . . The only people being consulted are big, big industry. Industry generally – the oil and gas sector, the mining sector, forestry – have been calling for those changes for some time."

He said the solution instead is for the government to consult with stakeholders, including farmers, commercial and recreational fishers, First Nations, environmental groups and the tourism industry, for example - but in recent years such dialogue has fallen by the wayside.

"There is a lot of room to meet the needs of farmers and fish habitat – there's a common ground there," he said. "Farmers I talked to were more than happy to talk to us. We're on same page in a lot of ways.

"These people are being left out to dry, their properties are being affected, their livelihoods are affected – not because of the act, but because the government is not working with them. If (the Canadian Taxpayers Federation) objective was to drive a wedge between farmers and environmentalists, it didn't work."