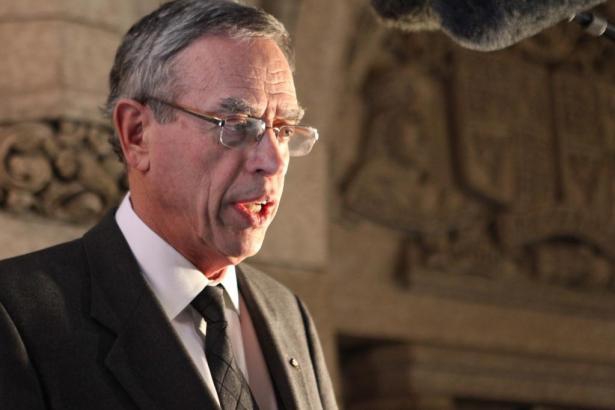 Buried in the Harper government’s Responsible Resource Development announcement is a pledge to increase pipeline inspections and enforce monetary penalties for environmental violations. But according to environmental groups, these measures don’t make up for the general weakening of Canada’s environmental review process.

“The process to look at and reduce the impacts before projects are built is being weakened, but the fines for problems down the road are steeper. It's cheaper and safer to deal with these issues up front,” she said.

Natural Resources Minister Joe Oliver announced details of the plan today in Toronto, confirming the federal government’s intent to “streamline” environmental assessments and make it easier for new resource projects to get off the ground.

“The Harper Government’s plan for Responsible Resource Development will create good, skilled, well-paying jobs in cities and communities across Canada, while maintaining the highest possible standards for protecting the environment,” Oliver said in a statement.

“It will help prevent the long delays in reviewing major economic projects that kill potential jobs and stall economic growth by putting valuable investment at risk.”

Most of Oliver’s announcement focused on measures previously hinted at in the federal budget: a “one project, one review” system that combines provincial and federal assessments; reducing the number of agencies that participate in the reviews; and maximum two-year time limits on project hearings and assessments.

But the plan also includes a few points about implementing monetary penalties for industry, if project operators violate the terms of their environmental approvals. According to Natural Resources Canada, “this means proponents of major projects will have to comply with conditions set out in the decision statements or may face tough financial penalties. The proposed penalties could range from $100,000 to $400,000.”

In addition, the ministry claims to have committed millions of dollars to strengthening pipeline and marine safety efforts ($35.7 million over two years for tanker safety, $13.5 million for pipelines). With the extra funding, they plan to increase routine pipeline inspections by up to 50 per cent, from around 100 to 150 inspections per year.

For environmental groups opposed to major projects like the Enbridge Northern Gateway pipeline, these additions to the regulatory process don’t appear to cut it. Organizations including the Pembina Institute and the Vancouver-based Wilderness Committee responded to Minister Oliver’s announcement today, calling adjustments to the environmental process “reckless and irresponsible”. Their responses contained no mention of additional inspections or industry penalties.

“Steeper fines in themselves will not fix the problem, but need to be coupled with stringent measures to reduce environmental harm in the first place, and enforcement,” McEachern told the Observer via email.

“The staff dedicated to enforcement and emergency response at Environment Canada are being cut dramatically, so who will be around to enforce the fines?”

McEachern’s comments echo the concerns of environmentalists across Canada this week, regarding the decision to close down regional offices responsible for dealing with oil spills and other environmental emergencies. Last Friday, Environment Canada confirmed that emergency response offices in Vancouver, Edmonton, Toronto, Montreal, Dartmouth and St. John’s would be consolidated into just two central locations in Montreal and Gatineau, Quebec.

With new pipeline proposals like the Northern Gateway aiming for a port in Kitimat, BC—not to mention the expansion of a Kinder Morgan pipeline that would bring up to 360 tankers per year to the Burrard Inlet—the elimination of regional offices has been described as “incredibly negligent”. But officials say the central emergency response team will still be on call to assist provinces in the event of a spill, claiming that neither citizens nor the environment will be at greater risk.

“Kinder Morgan has effective spill response in place through its own preparedness, and through its coordination with other emergency response agencies in the area, and in particular with West Coast Marine Response Corporation,” Galarnyk said in an email.

“Kinder Morgan believes that this, combined with the Government’s additional commitment and funding to marine safety will contribute to maintaining, and improving as necessary, marine safety.”

The company also indicated that new announcements regarding fines and additional inspections won’t change how they conduct their operations.

“Pipeline operators such as Kinder Morgan have always been subject to a wide variety of regulations, and potential fines, both at the national level and provincial level.  Kinder Morgan has always committed to complying with governmental and regulatory orders, and this action by the Government highlights the importance of industry members complying with such regulations and orders,” Galarnyk explained.

“We will continue to apply the same high standard of rigour to our operations when it comes to safely operating our pipeline and protecting the environment.”