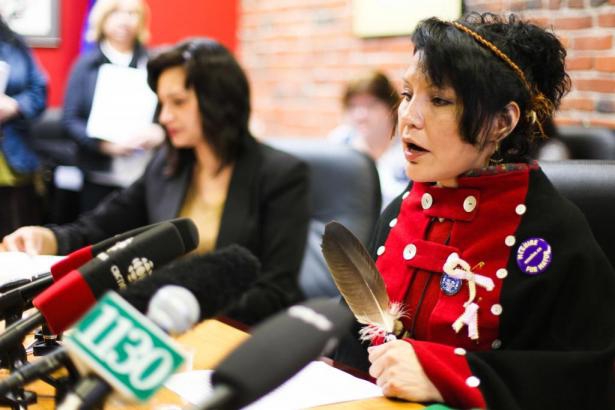 Critics of the Missing Women Inquiry re-affirmed their opposition to participating. Photo by David P. Ball

As the Missing women Commission of Inquiry hit its final weeks, 15 excluded organizations have called for national and international intervention and action.

“The Commission has lost all credibility among Aboriginal, sex work, human rights and women's organizations," read an open letter issued by some of Canada's most prominent civil society organizations – including Amnesty International, the Native Women's Association of Canada and the Assembly of First Nations. The letter was signed with Vancouver community groups rejecting Commissioner Wally Oppal's plea that they reconsider their earlier boycott.

The groups released the letter at a packed press conference at the Union of BC Indian Chiefs' offices this morning, where an atmosphere of steely resolve and consolation saw journalists, Pickton victim families and organization directors hold hands and pray.

“We are not prepared to lend the credibility of our respective organizations' names and expertise to this Inquiry, which can only be described as a deeply flawed and illegitimate process,” the open letter said.

“Women have been going missing from Vancouver's Downtown Eastside, and across the province, for decades. The government's failure to commit the necessary resources to this Commission does not bode well for its commitment to implementing any of the Commission's recommendations. . . We see little value in spending our organizations' extremely limited time and resources contributing to a process that is fundamentally flawed and irredeemably defective.”

Several participants in a press conference this morning – which opened with prayer, held hands in a circle and coiling sage smoke – said their push will now be entirely directed towards pushing Canada to cooperate with a United Nations investigation into missing Native women in Canada announced last year, and for a national royal commission of inquiry.

“We know what the root causes are,” said Lisa Yellowquill, with Battered Women Support Services. “But we want them on paper: racism, sexism and poverty.