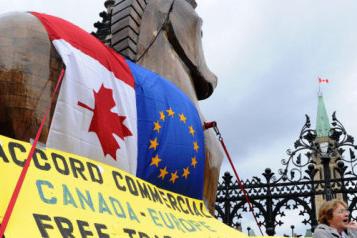 “We're not against trade, my God!” said Paul Moist, national president of CUPE (Canadian Union of Public Employees), when The Vancouver Observer asked him about Canada's free trade agreement with Europe. “Canada's a trading nation.”

The devil, one could argue, is in the details. The Comprehensive Economic and Trade Agreement (CETA) recently finished its ninth and final round of talks and is now being hammered out by bureaucrats. But its intense secrecy means that the Canadian public knows precious little about what the Conservatives boast will be the “most ambitious” trade agreement in history.

We do know that CETA contains a dispute process that sets transnational corporations up against governments, and restricts the freedom of municipalities and provinces to tender contracts. We also know it will be presented – complete – before Parliament later this year for approval, if all goes according to plan.

For the head of Canada's largest union, it's the secrecy that is most frightening.

“Our number one concern is the lack of transparency,” added Moist, CUPE's national president. “Trade unions in Europe get information sessions in the European Parliament.

“We'd like the opportunity to appear before a parliamentary committee. . . (but) because of their parliamentary majority on the trade committee, the Conservatives blocked a suggestion from the NDP that CUPE be allowed to speak. . . If it's a good deal, it'll stand the test of open, transparent discussion.”

For Moist and other top labour leaders, the secrecy of CETA underscores what is seen as a deep-seated fear of popular discontent amongst officials – particularly in light of contradictory job creation predictions that spell either doom or delight for Canadian workers if the deal passes.

From the government's perspective, the deal would dramatically increase exchange with Europe – by 20 per cent, official figures suggest. That, said international trade minister Ed Fast, equates to more jobs in the wake of the financial crisis.