New Democrats are outraged after their leadership election was attacked by thousands of computers on Saturday. Was the NDP attack an "attempt to thwart democracy"? And if so, who is behind it? 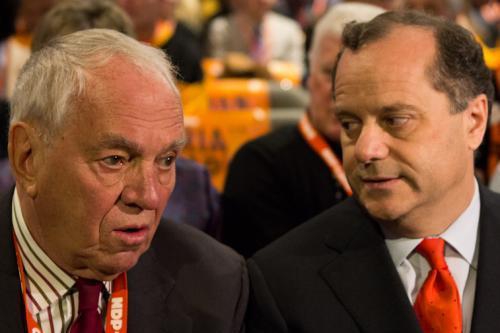 The NDP has revealed that thousands of computers tried to disrupt its election on Saturday, evoking the 2011 "Pierre Poutine" election scandal.

Was a Pierre Poutine-style attack behind the site slow-downs that embarrassed and disrupted the New Democratic Party leadership vote on Saturday? Today, the company running its online election – in which Thomas Mulcair was chosen as head of the Official Opposition – has revealed that a “malicious, massive, orchestrated attempt to thwart democracy” was behind the party's embarrassing voting website crashes this weekend, which some pundits viewed as a hit on the NDP's credibiliy.

“We deeply regret the inconvenience to NDP voters caused by this malicious, massive, orchestrated attempt to thwart democracy,” said Susan Crutchlow, general manager of Scytl, the Spain-based company contracted to carry out the election. “The required organization and the demonstrated orchestration of the attack indicates that this was a deliberate effort to disrupt or negate the election by a knowledgeable person or group.”

The NDP, which at first suggested the voting delays were merely caused by larger-than-expected turnout, acknowledged by mid-Saturday afternoon that an intentional attack was likely. That was proven today, as three suspected Internet Protocol (IP) addresses involved grew to thousands.

"We are proud, however, that our robust system, which is used by many governments around the world, repelled this attack, did not crash, and completed its mission of giving all NDP members who wished to vote the opportunity to do so securely,” Crutchlow added.

False requests flooding NDP website The attack – known as a Distributed Denial of Service (DDoS) often employed by hacker activists – involved “hundreds of thousands” of false requests to the website, from more than 10,000 separate computers, according to the company hired to conduct the secure vote. Despite overwhelming the internet servers at times, the results remained secure, the party insisted. No fake robocalls marred the NDP leadership race, and no voter was sent to the wrong place for Saturday's vote.

And while there is no evidence to suggest a link to the growing voter suppression scandal that has now erupted in up to 100 ridings across Canada – involving reports of illegal phone calls during the 2011 federal election – the revelations of a large-scale, orchestrated attack draw some parallels to that scandal. Some of the illegal calls were traced to a cellphone traced to an improbably named “Pierre Poutine,” on a non-existent “Separatist Street” in Quebec.

Although the party insists the results were secure, members expressed frustration as the DdoS attacks caused website crashes and slow-downs throughout the day, and turnout after the first ballot continued to drop.