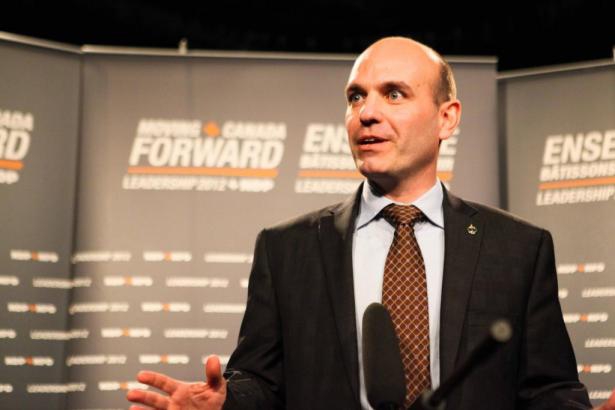 “I'm sorry for my voice,” Nathan Cullen says, his words raspy over the phone, after coming in third-place in the New Democratic Party leadership race this weekend. “I've been shouting quite a bit, and then got a cold – it was enough to strain the cords a little bit.”

Despite a hoarse post-convention throat, the northern BC Member of Parliament was back in the House of Commons today after a protracted and sometimes bitter party leadership race. He told the Vancouver Observer that leader-elect Thomas Mulcair impressed him with his first performance as party chief today.

"Since the Conservatives came to power, Canada has lost hundreds of thousands of good jobs in the manufacturing sector,” Mulcair said in Parliament's Question Period. “In Winnipeg, Montreal, Toronto, thousands of families are in distress. Why are they doing nothing?”

For Cullen, the new leader's question was “very, very classy” for focusing on jobs, something of concern to many Canadians in the aftermath of the financial crisis.

“He hit tones that were really important – talking about the economy,” Cullen said. “I think it was absolutely perfect.

“We're now back in Parliament. It's game on: right back to work. People are happy to have a permanent leader.”

Mulcair's decision to keep Vancouver MP Libby Davies – who represents the party's activist roots – as his Deputy Leader was widely seen as an olive branch to heal divisions of the campaign, in which she backed leadership rival Brian Topp.

“Tom's taking a very good page out of Jack's book,” Cullen said. “Every party is a coalition of different interests, ideas and motivations.

“Bringing Libby in like that was smart and classy. (She) is incredibly talented and means much to so many people. That was really, really important, because they were on different sides of the aisle in the leadership race, and she's an important figure within our movement. For her to come back on as deputy shows great confidence in Tom.”

Asked to describe his experience in the NDP convention on Saturday, Cullen said it was an “absolute blast,” and said he felt “blessed” by how far his campaign made it in the ballots.

“We actually saw a path to victory, and started to have to get ready for that as well,” he said. “It was quite stunning.

“I didn't understand physically what would happen: a significant rush of cameras and journalists climbed up onto bleachers; they got up over top and through our supporters. It was very hot, intense: a lot of yelling, the crowd cheering.”

Now, Cullen said, the task of knitting the party together and taking on the Conservative government is more important than ever. He described dancing late into Saturday night with fellow party members – then getting down to business on Sunday morning.

“We had caucus that morning, which was really positive,” he said. “You always hope the team can come together, and hope the arguments of a campaign don't continue. But they didn't.

“It really feels like people are on board. I feel totally committed to what happens next.”

Cullen's campaign became the focus of many media commentators on Saturday, as other rivals dropped out or were removed from the race over the course of the NDP convention. Some speculated that he would become the “kingmaker” and offer to drop from the race in exchange for a position in Mulcair's shadow cabinet.

But that was out of the question from “virtually the first moment” of his campaign, Cullen insisted.

“People who were suggesting that would transpire obviously didn't know me, or didn't believe me when I said I'm not into deal-making,” he said.

“The decision is up to the members – not backroom negotiations.

“You can't talk about doing politics differently, and at 11th hour go back to the most traditional and cynical form of politics. That would be a contradiction in terms.”