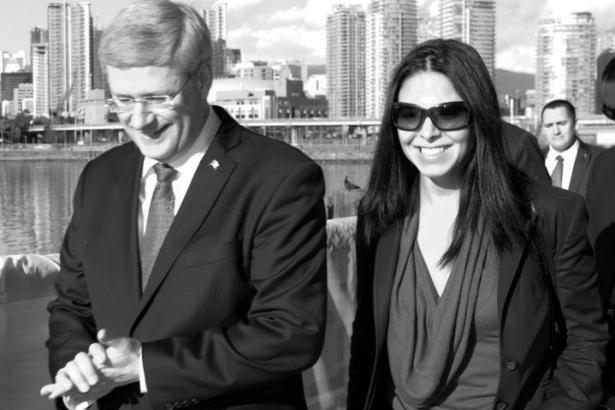 Sara MacIntyre, Prime Minister Stephen Harper's former press secretary, made a splash in her first week on the job as British Columbia Premier Christy Clark's media handler. And handle the press, she did.

In a video being widely circulated on the internet, MacIntyre – the conservative Canadian Taxpayers Federation (CTF)'s former British Columbia director – got snarky when several reporters at a trade show attempted to ask Clark about her proposal to move welfare recipients to jobs in northern British Columbia.

“But you said that the Premier –” one reporter protested, before MacIntyre interrupted her.

“– No I did not. Where? I did not issue an advisory saying she was taking media questions.”

Minutes later, when journalists decided to bypass the press secretary and access Clark directly, MacIntyre inserted herself in front of the camera in a seeming attempt to spoil the shot.

“She's not taking questions today,” she repeated. “If you want to shoot the Premier, she's right there.”

MacIntyre started her BC job on March 6, nearly a month after announcing her resignation as Harper's spokesperson on February 10. She is the latest in a series of federal Conservative hires for the premier which include former Enbridge, Taser, tar sands and pharmaceutical lobbyist Ken Boessenkool, who served as a chief advisor to Harper.

MacIntyre, a political science masters candidate at the University of Calgary, previously served as head of the CTF's BC branch, communications director for BC wind energy company NaiKun, and a policy researcher on human resources and Aboriginal affairs when Harper was leader of the opposition.

“The exchange brought back all the memories of what we go through every day with the Harper government: tight media control, lack of respect for the media,” said Robert Fife, CTV's Ottawa bureau chief. “She's taken the Harper media plan and brought it to B.C.”

But the mid-thirties staffer – who took over former BC press secretary Chris Olsen's $125,000.10 a year job (salaries accessed by a Canadian Taxpayers Federation document request) – has a background as politically engaged as it is technical. She's no public relations flak, it turns out.

With BC teachers taking job action currently, and Clark's Liberals pushing back-to-work legislation through this week, it is interesting that MacIntyre herself has played a prominent role in the issue in 2005.