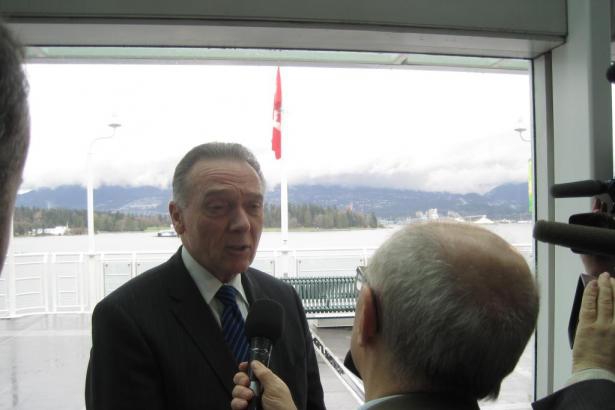 Environment Minister Peter Kent refused to answer a question from The Vancouver Observer this morning about Conservatives' use of American strategists to win a majority government during the 2011 election.  But he criticized Canadian green charities for making use of American donations, however, and would not speak to a reporter's question regarding why one was okay, according to Conservatives, and the other not.

"The government has been criticizing environmental groups for bringing foreign influence into a domestic issue. Meanwhile, there's extensive foreign investment in oil and gas, and Conservative MPs have also been shown to have used US strategy firms to help win the 2011 election. Is that not seen as foreign influence in domestic issues as well?" VO asked Kent.
"I won't speak to specifics," Kent answered, with a stiff expression. "But I will say this: on one hand, concerns have been raised and they're being examined by the Finance Committee of the Standing Committee of the House. With regards to foreign funds which are channeled through Canadian charitable agencies .... I think the questions that are being asked are, do those funds put the charitable status of those agencies at risk? Because there are quite stringent regulations."
VO also questioned Kent about the millions of dollars in foreign investment from the U.S., China and Europe in Canada's oil and gas industry. Wouldn't this also count as a foreign influence? "(Foreign corporations) do it as contributors to the national economy, and to jobs, and they don't do it through the back door, if you will," Kent said.

"The concern that you've heard expressed by our government is that some funds are coming into the discussion and consideration of Northern Gateway -- that are coming in through the back door -- are not intended to ensure the best consideration of this project."  He also talked about "environmental mitigation" of the proposed oil sands pipeline, saying opponents have presented statements at the pipeline's Joint Review Panel hearings "as a means of obstructing and blocking any responsible consideration."