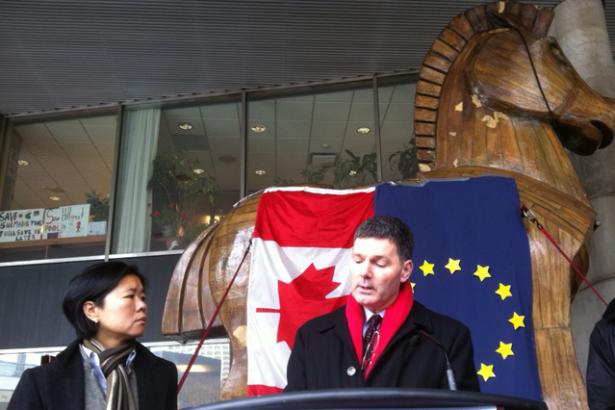 A free trade deal is being negotiated in secret with the European Union, on top of sweeping new federal laws before Parliament. This week, Toronto City Councillors rolled a Trojan horse to City Hall, warning of the deal's dangers.

Parliament is back at work. With a solid majority, Ottawa is set to push through Prime Minister Stephen Harper's controversial bills on crime, immigration and copyright... and a dramatic agreement in secret.

The House of Commons and Senate are barely a week into their new year sittings, and already Canadians have seen uproars over surprise pension changes, a Senator's death penalty remarks, one MP comparing the Liberals to Hitler, and another MP's potty mouth.

But what can we expect to see in the coming months from our representatives? The Vancouver Observer scanned the files to bring you five critical laws we can expect to come into force this year.

Status: Not yet tabled. Anticipated in March.

We are living in the Global Age of Austerity. Despite some economists' warnings that harsh spending cuts akin to European cutbacks will harm Canada's economic recovery, business experts have already labeled the upcoming federal budget an “austerity budget.”

“What we are going to have is a budget that takes us on the road to prudent results in the medium and longer term,” said finance minister Jim Flaherty on a recent tour.

But, despite not yet being submitted to Parliament, the impending federal budget is almost certain to be one of the most dramatic in years. The Conservatives have already told government departments to cut five to ten per cent of their spending – amounting to $4 billion in cutbacks – but Treasury Board president Tony Clement has hinted at slashing $8 billion.

This will be the first Conservative majority budget – no longer is there a risk of the government toppling in a confidence motion, as happened under minority governments.