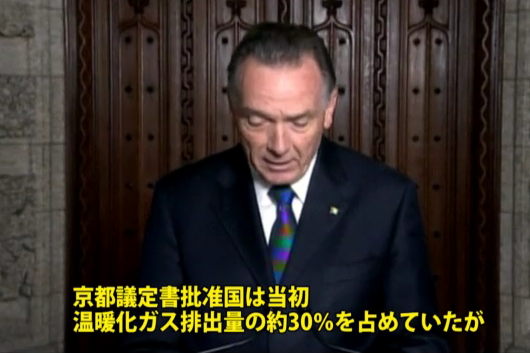 "It is regrettable, and flies in the face of the efforts of the international community for Canada to leave the Kyoto Protocol at a time when the Durban meeting, as everyone knows, made important progress by securing a second phase of commitment to the Protocol," Chinese Foreign Ministry spokesman Liu Weimin said.

China is the world's largest emitter of greenhouse gases, but was exempt from the first Kyoto Protocol as it was classified as a developing nation. It has recently agreed to launch talks for a new pact that would legally oblige all the majors emitters to take action.

"Canada has decided to abandon responsibility not only for future responsibility for reducing carbon emissions, but even its current obligations according to the Protocol," reported Japan's Asahi newspaper.

"Canada did ratify the Kyoto Protocol...but greenhouse gases have tended to increase in the country, despite responsibilities to reduce them," said Japanese business newspaper Nikkei. The newspaper also contrasted Canada to Japan, which has remained committed to Kyoto and to increasing energy efficiency.