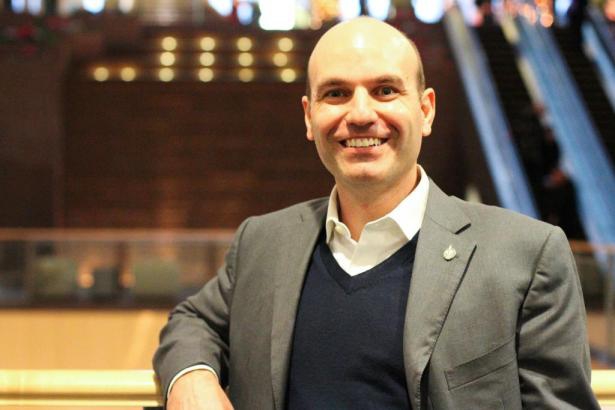 New Democrats young and old squeezed into Smiley's Pub on West Pender Street on Friday night, buzzing with interest and questions for leadership candidate Nathan Cullen and his rock-the-boat ideas.

The Skeena-Bulkley Valley MP's campaign has stirred up debate and attracted attention -- criticism, too -- with a call for an
American-style primary process that would see NDP and Liberal
supporters band together to nominate just one candidate in ridings where Tories rode vote splitting to victory.

He would also have a national vote let Canadians decide for themselves whether to drop the monarchy and pick up proportional representation.

But it was Cullen's environmental stances -- against Enbridge's
proposed B.C.-spanning tar sands pipeline, for cap-and-trade -- and his progressives-united philosophy that helped bring many of the roughly three dozen NDP supporters together into the packed downtown bar.

His opposition to the Northern Gateway Pipeline was one reason Kathryn Askew made the trek from the provincial NDP convention several blocks away to the Cullen meet-and-greet.

That wasn't the longest trip the Vancouver Island North Riding
Association president has made lately, but it was one the undecided delegate took to meet a candidate she said has his ear closer to the ground than Prime Minister Stephen Harper.

"I want a leader who is constantly reminding all of us -- not just NDPers, everybody in the country --  what really matters on a day-to-day basis," she said.

Cullen took a break from fielding questions from other New Democrats, including a University of Victoria group curious about his cross-party nomination proposal, to tell the Vancouver Observer it's time Canadians and their politicians shed tradition and start talking up untouchable third-rail topics.

"I think sometimes we've been afraid of debate. I think sometimes our
orthodoxy gets in the way of new ideas, and I think there's a hunger
within Canadians to have new ideas taken seriously and to have parties
stop being so self-interested."

He said voters in Vancouver have a sense of what co-operation between
progressive politicians looks like: the 2008 non-compete pact between
COPE, Vision Vancouver and the Vancouver Green Party.

That coalition saw the three parties rally behind
then-mayoral candidate Gregor Robertson and run a joint slate for
other municipal posts. The result? An electoral wipe-out of the
governing right-of-centre NPA.

Cullen said a similar party-line rethink federally, resulting in a
government boosting transit funding and tackling climate change, is
what voters here are after.

"I think Vancouverites want to see their progressive politics
reflected up at the national level, because they don't see themselves
reflected in this government at all."

For more on Cullen and other candidates, see the Federal NDP leadership race explainer.