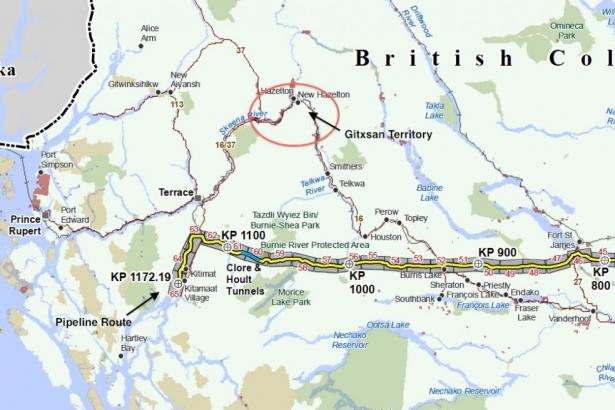 A map of the region shows the general location of Gitxsan territory in relation to the proposed Northern Gateway pipeline route.

As opponents gather to protest a controversial deal struck last week between Enbridge and the Gitxsan Treaty Society, hereditary chief Norman Stephens says negotiators responsible for the agreement had no support from Gitxsan communities.

“We should be clear that the Gitxsan do not want the pipeline, at any cost. There are not communities behind it,” Stephens insisted.

“This is an act of the Gitxsan Treaty Society purporting to represent the Gitxsan hereditary chiefs.”

The $7-million agreement, announced Friday by chief negotiator Elmer Derrick, was initially meant to signal support for Enbridge’s controversial Northern Gateway pipeline. But other Gitxsan leaders and hereditary chiefs were quick to express their outrage over the negotiations, noting that many had never been informed about the deal.

This week, opponents of the $5.5-billion pipeline have formed a blockade outside the treaty office in Hazelton, B.C. to protest the agreement. The blockade is part of the group’s plan to shut down the office permanently, after repeated disagreements over the Treaty Society’s authority.

“The building has been boarded up, no one is allowed in,” said Stephens in an interview with the Vancouver Observer.

Since the proposed pipeline route does not actually cross traditional Gitxsan territory, leaders like Stephens say it’s unclear what the agreement actually means for the Nation and its bands. The initial announcement suggested the Enbridge deal could pave the way for future renewable energy projects in the region, but so far the focus has been on the Northern Gateway project.

“My feeling is that they were paying $7 million for them to stand up and say ‘We are in favour of the pipeline’,” said Stephens.

“Now if you figured out $7 million over 30 years, that’s $233,000. You divide it by 10,000 Gitxsan, that’s only $23 per Gitxsan per year. It’s shocking that Elmer is willing to risk our resources, and the resources of our neighbours, over such a laughable amount of money.”

Derrick and his colleagues could not be reached for comment, as the treaty office is currently closed by the blockade. But recent reports from The Province and the Vancouver Sun indicate that both Enbridge and negotiators from the Gitxsan Treaty Society remain confident that the negotiation process was fair and representative.

According to other leaders, including Stephens, hereditary chief Larry Patsey and Gitanmaax chief councillor Marjorie McRae, the majority of Gitxsan members disagree with the decision and claim they were not even consulted.

“I have yet to see one hereditary chief stand up and say they were in favour of the Enbridge deal. And there are many hereditary chiefs who are quite outraged over this and are speaking out against it,” said Stephens.

McCrae and a number of other representatives are also suing the Gitxsan Treaty Society for restricting hereditary chiefs’ involvement in negotiations. Stephens says he hopes that the current blockade and the termination of top negotiators will help resolve the legal dispute.

Josh Paterson of West Coast Environmental Law said that despite heated discussions and media attention around the Gitxsan-Enbridge agreement, he doesn’t believe it will have much of an impact in terms of pushing the Northern Gateway project forward.

“Enbridge can do all it likes, getting whatever deals it might. But the First Nations opposition that we’ve seen is so strong that ultimately, I don’t think it’s going to make any difference,” he said.

More than 130 different First Nations have now signed on to the Save the Fraser Declaration, which bans pipeline projects and tankers across British Columbia. Last Thursday – just one day before the Gitxsan announcement – marked an important turning point in the opposition, as Aboriginal leaders from all over the province came together to sign the declaration and reinforce their position on the issue.

“On Thursday we saw just a huge expression of opposition from First Nations, and I think Enbridge is having a hard time handling that,” said Paterson.

He said that First Nations will be using all the legal tools they have available to them, to protect BC's rivers and coastlines from oil spills.

"I don’t think that Enbridge is going to be able to escape the massive legal risks that are being generated for them by this project. This thing is going to be tied up for a very, very long time,” Paterson said.