Is this 'whack-a-mole'? Evicted from Robson Square, Occupy Vancouver relocates to east side. 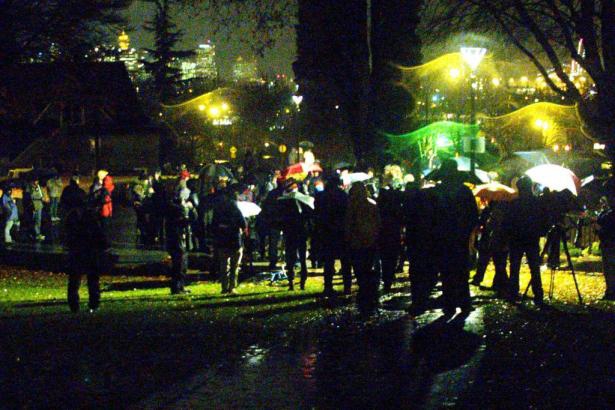 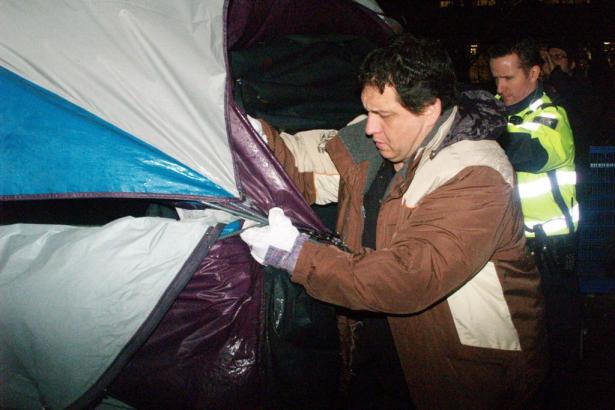 UPDATE (11 p.m.): Occupiers are continuing meetings out of the rain at the Centre for Socialist Education as they debate their camp's next steps. Some options discussed include an encampment in Stanley Park or an empty lot downtown, occupying a warehouse, or taking a hiatus to re-strategize.

(9:30 p.m.): Occupy has left Grandview Park (Commercial and Charles) and has agreed to reconvene there Wednesday at noon.

In a move akin to the fairground game 'whack-a-mole,' Occupy Vancouver has relocated to Grandview Park in Vancouver's east end this evening, only a day after popping up outside the law courts one block from their original encampment. Demonstrators read out a city letter demanding they leave the park by 10 p.m.

After a provincial judge granted an injunction this morning to evict Occupy Vancouver from its second incarnation outside his own court building – but not granting the province's request for a blanket ban on the protest – protestors complied with the 5 p.m. deadline and began a SkyTrain exodus en masse to their new Commercial and Charles location.

Response to the move has been mixed in the neighbourhood. Some residents protested with signs against the camp setting up, and others welcomed the demonstration against economic inequality which this month became a controversial election issue. By 8 p.m., only a volunteer medical tent and food service were established, with demonstrators disagreeing over whether to stay or relocate again to Stanley Park or a private lot elsewhere.

“We have now packed up from our first-ever flash occupation,” said Jaeme Grosvenor. “You're going to see more of these.

“It's more of a hit-and-run tactic -- we make our stand, we get coverage, we make the points we're trying to make, and as a mobile unit we just bug out and set up shop in another location.”

He said options for the future include moving as often as the protest is moved on, or taking a break of several days with possessions in storage, which has been offered by the Vancouver District Labour Council. What do the protestors make of hostility to the camp?

“Anybody who spends any time here will notice we have quite a large number of people who agree with what we're saying,” he said. “This is about everyone. We're here to actually change the way things are happening – not just to be heard.”

“We're well beyond complaining, we want to make solutions available to people who want to think and make up their own mind about which way our society should go.”

Protestors started meeting in their signature consensus meeting style, in which anyone can speak by announcing, “Mic Check” while the crowd repeats after each sentence to amplify their sound. For the first time in Occupy Vancouver's five-week demonstration, a city official addressed the group by waiting on the “speaker stack” list and using the “human microphone.”

Vancouver Park Board's general manager Malcolm Bromley waited for his turn to address the crowd, and asked them not to set up camp in Grandview Park, citing the recently completed park renovations and a 10 p.m. park curfew. Bromley was accompanied by two police officers. The two-year park renovations cost $2 million. He would not comment to the Vancouver Observer. 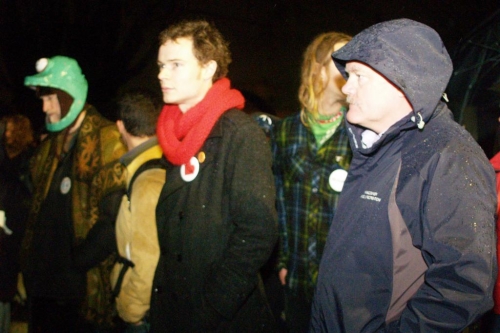 Residents around the park had a mixed response to the arrival of Occupy Vancouver.

“They gotta get somewhere else,” said Helge Myrsta, who lives nearby. “These people talk about the greater good of the people – this park had been under construction for two years, there's kids involved here.”

“They just left it a mess downtown. Find a vacant lot downtown, a parking lot, city property, go find a place to camp – not in a public park. This park was just finished – it's going to be destroyed.”

But other residents voiced their support for the protest movement.

“The Grey Cup's going to be here this week, there's going to be a lot of damage downtown. We have to cool it about who's doing damage.”

One demonstrator told the Vancouver Observer that the protest's success in negotiating housing for 16 homeless people in the final hours of the Vancouver Art Gallery encampment demonstrates its resolve to continue demonstrating against the economic system.

“Vancouver's developers are kind of like Wall Street – they are the money, they are where investment in Vancouver is going,” said Britta Fluevog, daughter of renowned shoe-maker John Fluevog.

“Every condo you put up is more units of social or affordable housing that are lost.”

“We managed to get 16 people housing yesterday. We have at least 11, maybe more, people who want housing today. The city needs to open up new housing. If wages are not going up and the price of housing is, basically they have no options.”

The Vancouver Observer asked a police officer watching the General Assembly in Grandview Park what authorities' approach would be.