As an eviction deadline arrived, most of the camp was loaded into trucks, and activists scrambled to find beds for about 30 homeless people. 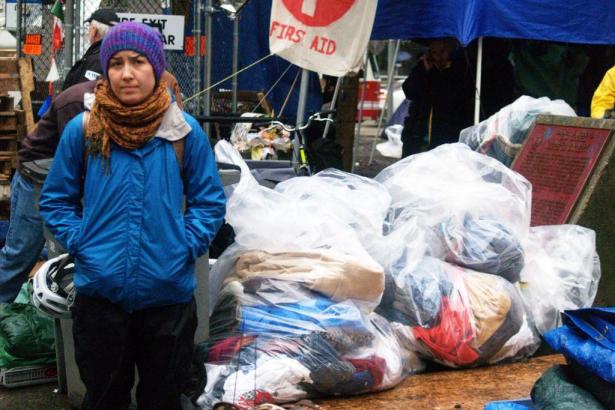 Most of the encampment was loaded onto trolleys and trucks, with garbage bags full of clothing and sleeping bags sealed. Photo by David P. Ball

*Update: Occupiers were setting up tents at the B.C. Supreme Court and appeared to be occupying Robson Square just behind the Vancouver Art Gallery late Monday afternoon.

As Occupy Vancouver's 2 p.m. eviction deadline arrived Monday, almost all of the encampment had been loaded onto trolleys and trucks, with activists hinting they are planning to restart an encampment at a new location.

A solidarity march headed west on Georgia Street, away from the gallery as advocates for the homeless scrambled to find beds for about 30 people who had been sleeping in the tent city.

Plans were afoot to move the encampment to a new, undisclosed location, sources inside the camp told the Vancouver Observer.

"There's a plan," said a volunteer, who would not give his name. "It's not released yet, most of us don't even know it."

Union supporters -- who offered storage space and volunteers -- remained at the site, helping pack up the remaining supplies.

Russ St. Eloi, an executive member of the Vancouver District Labour Council, joined other union members hauling pallets and drainage pipes off the site, slogging through the growing muddy swamp that has engulfed the encampment since rain began in earnest several weeks ago.

"We're helping out," St. Eloi said. "We've agreed to rent trucks and a storage space for them to put their stuff in for an undetermined time.

Wendy Pedersen, with the Carnegie Community Action Project, expressed frustration that the issues of economic inequality raised by Occupy Vancouver have not been addressed by the city -- including homelessness.

"We'll be trying to defend our rights to be on the site with a structure over our heads to protect us from the elements, because there are homeless people here on the site," she said.

"There's no decent shelter or social housing in this city. They're all full. We have to stay until we find housing."