Hip-hop isn't your usual electoral terrain, but this week we parlayed with three rappers who want to get out the vote. 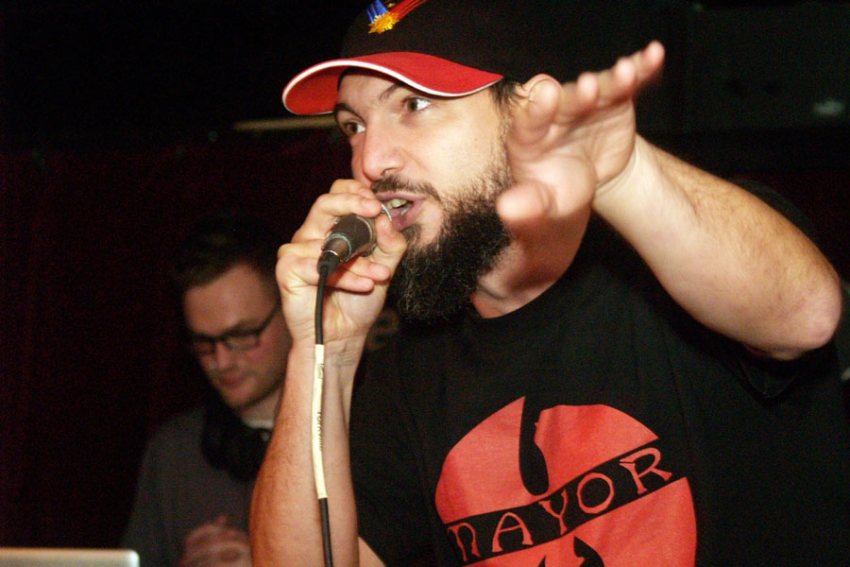 Dubgee -- aka Harley James Rose -- performs at a campaign event at the Media Club this week. Photo by David P. Ball

Might a rap battle between politicians help get out the vote?

With voter turnout expected to continue at historic lows today, the idea was floated during this campaign by independent mayoral candidate Dubgee – a rapper running under his stage name who this week was suggested as a protest-vote-alternative to Mayor Gregor Robertson in the Georgia Straight.

Hip-hop isn't your usual electoral terrain, but this week the Vancouver Observer parlayed (talked) with three rappers to discuss voting, politics and the issues sidelined by the media.

“I mean, realistically, I'm a musician,” Harley James Rose, aka Dubgee, admitted. “I don't want power over the city right now. My goal was really to raise awareness of the issues and try to raise the voter turnout in my neighbourhood.”

“I took two months out of my life, and I'm broke. I got no job, I'm on the verge of eviction here. For me to take that time and energy out of my life and put it into something this big, I really hope that people will be inspired to take 30 minutes out of their day to go out and vote for somebody who'll actually make the changes – somebody who's honest.”

On Hastings, in the heart of the Downtown Eastside, rapper The Dirty Sample – aka Planit, real name Josh Thorp – ends his manager shift at Save-On-Meats and joins me in a booth over coffee. The veteran Calgary-born rapper, who moved here two years ago, donated the proceeds of his latest album – Kings EP – to Vision Vancouver. He expressed concern for housing affordability, homelessness and gentrification in the Downtown Eastside.

“I don't know how much I want to talk about supporting (Vision) – it's my own personal politics,” he cautioned. “But I think they've got some positive ideas. There's some projects Vision has done -- to lower rent is a big one for me, more low-income housing for people. People gotta live, if we're all equal we should all have housing.”

“Mostly, I make sure I go and vote every year, and I tell people around me to go and vote. We live in Canada and we get the chance to vote. God, look what's happening in the world where people have to fight the oppressor to even have a chance to live as an equal human being.”

Thorp, 30, pauses to think about some rhymes he's penned about social issues from what he estimates are his 16 albums. His hands bounce in staccato with the rhythm as he spits out lyrics from his album Two Blue Apes (The Modern Day Lo-Fi Experiment):

“Sweatshops and slave ships
Pirates and divinity
Armies of poor folk who claim they have their dignity.” (Listen to MP3)