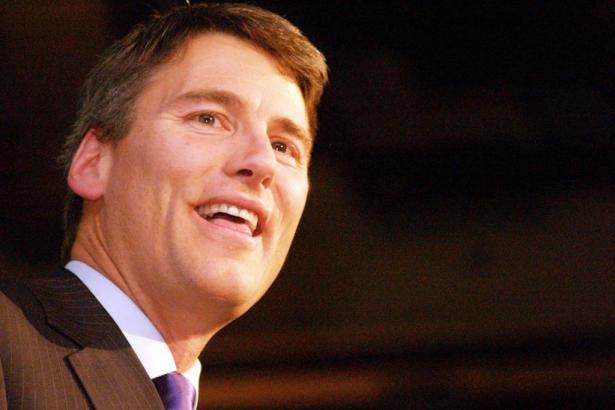 Still no final word, but cheers are getting louder and louder each time Vancouver numbers show up on the screen. With less than 10 polling divisions left to report, Robertson's lead over Anton is adding to the energy in the room.

Here's an early peek at the scene at Vision Vancouver headquarters:

The room is buzzing tonight as Vision Vancouver supporters crowd into the Pavilion Ballroom at the downtown Sheraton Wall Centre. By 8 p.m. as the polls closed, reporters were finally outnumbered by guests and Vision volunteers, all on the edge of their seats waiting anxiously for results.

While early results streaming in on the Vancouver Votes website showed a fairly close race between Gregor Robertson and the NPA’s Suzanne Anton, candidates and supporters at the Vision headquarters say they’re very optimistic.

“This whole campaign has been fantastic,” said school board candidate Mike Lombardi.

“I think people are really responding to the positive nature of what we’ve got to offer. I’m feeling pretty good, I think the whole team has been working well together. We’ve had over 1,000 volunteers working on the campaign and it’s been fantastic.”

Those volunteers made up a large part of the crowd at the Wall Centre, standing around tables serving “small farm” veggies, dressed in everything from jeans to glitzy cocktail attire.

Campaign volunteer Broderick Albright has been canvassing and making phone calls for Vision since last month. A project manager for a clean-energy company, he said his reasons for supporting Mayor Gregor Robertson have a lot to do with sustainability.

“The reason I’ve been really supportive is because I’m really inspired by the Greenest City initiative. [Robertson] is like the only person who’s really talking about planning and building a city for the future – and not the next few years, but actually the future. It’s actually a ‘vision’,” said Albright.

The crowd at tonight's party included volunteers and donors both young and old, as well as families and children all sharing in the excitement. One of the other big topics on voters' minds has been the expected turnout. After a disappointing showing last election - just over 30 per cent of eligible voters - many are hoping for improvement.

Arriving at the party straight from the polls, Vision Vancouver scrutineer Jennifer West said she has faith this election will see higher turnout than last time.

“I was in Kitsilano and Point Grey, and it was steady all day,” she said, noting that the extended dates for advanced voting were a good move to encourage more people to cast their ballots.

Between the friendly conversations and trips to the bar, all eyes have been focused on the big screens at the front of the room, tuned to Shaw TV for incoming results. While early counts placed Robertson and Anton neck in neck, the gap is slowly widening as Vision candidates creep ahead.

Stay tuned for more election night coverage as the final results are announced in the coming hours.