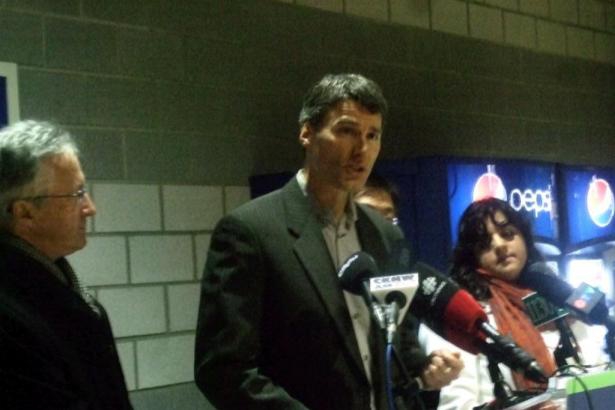 Robertson said that adding an extra 15 to 20 extra hours of service on the weekends would cost less than a million dollars a year.

"It helps provide a much-needed service for our students in our downtown area, to help our students get home safely," he said. He added that he was working with Surrey Mayor Diane Watts on making sure that the expanded SkyTrain service would extend for people going from downtown to the suburbs.

Nimmi Takkar, an advocate for the U-Pass and former member of the Students' Union of Vancouver Community College, said that Vision was "on the right track" for focusing on increased bus services during late hours.

"Like a lot of my friends, I'm broke. I work a lot while going to school full time and that means I often have to take the bus home at night," she said. "It's important that the bus be there at the end of my work shift or class to make sure that I get home safe."

She praised Vision Vancouver for being the first political party to endorse a fair-priced universal bus pass for students, and said that B.C. students have become the first in Canada to have a standardized universal transit pass as a result.