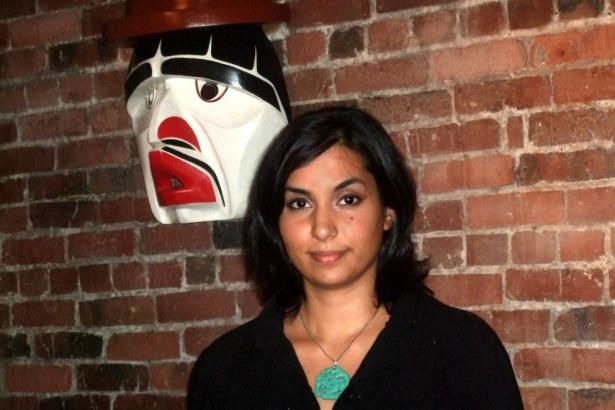 2011 Vancouver Civic Election: At first glance, Vision Vancouver park board candidate Niki Sharma seems like a warm, mild-mannered young lawer working in a posh Gastown office. But her resume reads like that of a tireless crusader against social injustice.

Sharma has been working at Donovan and Company since 2005, taking on human rights cases, aboriginal rights and title issues, helping survivors of abuse at residential schools. She sits on the board of the Battered Women Support Services, and also spent time in Ecuador working with women's cooperatives, developing education programs and organic agriculture projects. Everywhere she goes -- Nunavut, Argentina, South Africa -- she seems to be knee-deep in a community or public health project.

“I really believe in public service,” said Sharma, sitting in her law office, surrounded by gorgeous Native sculptures and maps. "I think it comes from my parents and my roots, but I also lived in South Africa for awhile ... I learned how social change can happen through a group of committed individuals with a focus on justice.”

A volunteer with Vision Vancouver during last year's elections, Sharma's attraction to politics might just run in the family. Her mother is currently running for City Council in Sparwood, B.C., Sharma's tiny hometown with a population of just over 3,800.

“I told her, 'Mom, you actually could knock on every door in town!'” she joked, laughing. "And it's just impossible here, but it's the best way to meet voters and I've been doing a lot of that. If you're going to ask for [a person's] vote, you should really introduce yourself."

Working for the under-represented

Sharma was born in Lethbridge, Alberta, but grew up in Sparwood, near the Rocky Mountains.

“I had a really wonderful small-town upbringing,” she said, adding that she came to Vancouver because her sister lived here, and because she loved the city.

Sharma explained that her travels up north led to her long-term commitment to aboriginal issues. While she was going to Queens University in Kingston, Ontario, she joined the Queens Project on International Development, and had a chance to travel for working with communities.

“I had the opportunity to go up north, so I was up in Nunavut for one summer -- I just met some really great people and was exposed to the issues,” she said, noting that she was lucky enough to meet many great aboriginal people over the course of her life.

After learning about the wide range of issues they struggled with, Sharma went on to specialize in aboriginal law.

“Fifty years ago, actually -- they (Aboriginal people) weren't even allowed to hire a lawyer,” she explains with a tone of disbelief.

“It's something I care about a lot because there's still a lot of issues that need to be resolved on the way that government treated First Nations people, all across Canada. Unfortunately a lot of the work is in the legal realm, whether it's criminal law or family law, rights and titles.”

Even though Sharma is herself neither Aboriginal nor a victim of abuse, she takes these issues seriously because she feels they are under represented in the public eye. She said she signed on to the Battered Women Support Services after being approached by the organization's executive director when giving a talk about female survivors of residential school abuse.

“I have no personal experiences, but a lot of women know someone who has been in an abusive relationship,” she said. “I'm very passionate about the issue of violence against women and how it affects people. It's a touch issue but so important and people need to pay more attention to it.”

Not an easy stereotype

Sharma may be a young woman of colour, but it's impossible to pin her to a particular community becasuse her cultural roots are just a small part of who she is.

“I wouldn't say there has been a lot of special media attention to me from South Asian media,” she said, reflecting on her past few weeeks of campaigning.

“I guess because I represent that community – my parents are from India ... it's hard to separate that from me, even though I grew up in Canada. I feel like I'm not unlike a lot of people who grew up in Canada but have ties to other countries.”