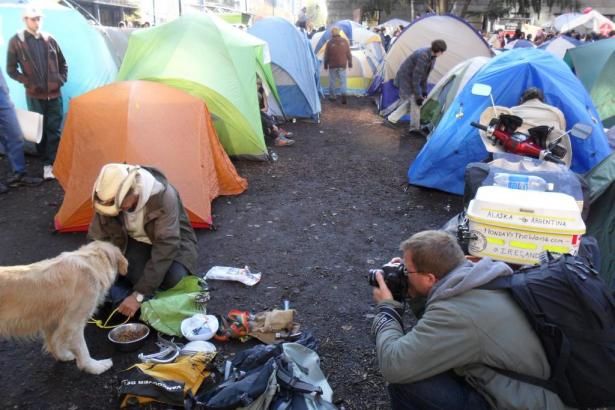 The poll shows the majority of residents have unfavourable views of the Occupy Vancouver encampment. Photo courtesy of InverseHypercube.

A new Angus Reid poll released this week offers some insight into currently prevailing views of Occupy Vancouver, but it also touches on other key issues and provides a somewhat entertaining list of candidate character traits offered up by residents.

Of the 402 adult Vancouver residents surveyed, 39 per cent said they would like to see a deadline to end the encampment at the Art Gallery. Another 36 per cent of respondents said they would prefer legal action to remove protesters and 15 per cent would allow the protest to go on indefinitely.

While Occupy Vancouver was at the top of the poll’s priority list, it was just one of the issues addressed in the survey. Residents were asked to rate the government’s performance in 12 different areas, and the City received high marks on things like sanitation services, bike lanes, protecting the environment, promoting tourism, public safety and fostering arts and culture.

Unsurprisingly, the scores were less impressive when it came to issues like Occupy Vancouver, the Olympic Village, helping small businesses and dealing with homelessness. The NPA’s pet peeve – backyard chickens – also made an appearance in the poll, with only 45 per cent of respondents in agreement that the City made a good call on the initiative.

Another key element in the Angus Reid poll asked Vancouverites to judge the two main mayoral candidates using a number of character traits. The list of descriptive words included both positive and negative adjectives.

Robertson appeared to come out on top, with three positive characteristics as opposed to Anton’s two. The respondents’ age brackets revealed a predictable pattern – while Robertson scored high with females and voters between 18 and 34, Anton’s support primarily came from those over the age of 55.

The poll provided an enlightening look at current attitudes in relation to both Occupy Vancouver and the mayoral candidates. But as witnessed throughout this election campaign, public opinion can often change as quickly as the direction of the wind.