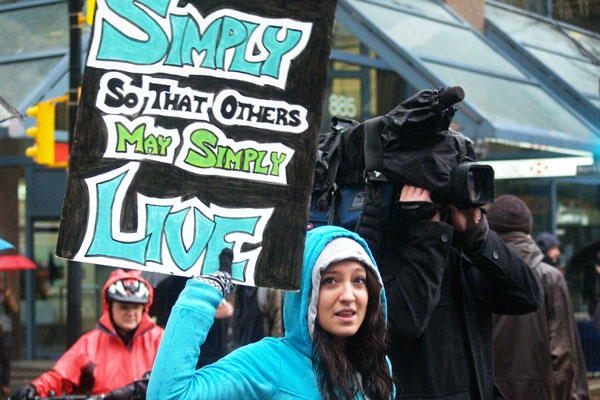 "Live simply so that others may simply live." Photo by David P. Ball

Nearly 150 demonstrators from Occupy Vancouver held a protest for affordable housing Saturday, marching from their art gallery encampment to the sites of a number of upscale developments they said are causing rising prices.

"This housing march is important because we're one week away from an election," said Ivan Drury, with the Downtown Eastside Neighbourhood Council. "The Downtown Eastside is the strongest reflection of the housing and homelessness crisis in this city that results from the out-of-control capitalist real estate market."

"Neither major parties have taken one progressive step forward. It is impossible for the market to solve problems the market produces."

Drury said he wants the city to buy ten sites in the downtown a year to replace substandard housing, to ban new condominium developments downtown until no one remains living on the streets or in shelters, and to amend bylaws to protect existing affordable housing.

"I am here to show my support and solidarity with the people of Vancouver who are looking for real options to housing solutions that don't just privilege the few," said Nicole Benson, a city council candidate with Neighbourhoods for a Sustainable Vancouver (NSV), seemingly the only political party represented at the march, although several independent candidates were also in attendance. "People in the election talk a lot about housing issues, but I don't think they will provide real solutions that work."

"Over the last six years, we're not getting the solutions we need. Just putting in more housing doesn't guarantee affordable housing or social housing. It's not just about putting up more and more condos."

One man, who followed the march shouting at demonstrators to go home, said he was frustrated that Occupy Vancouver was again blocking traffic in downtown Vancouver, and said protesters should get jobs. He would not comment on the record. Several other bystanders who disagreed with the march's aims also declined to comment.