Skirmish with fire department, police leads ex-Occupy organizers to reach out to city 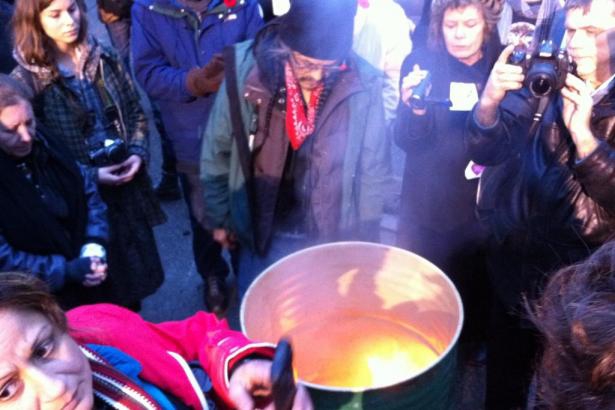 Despite the skirmish last night, Occupy Vancouver demonstrators lit what they called a "sacred fire" at VAG this afternoon

Following a skirmish last night between firefighters, police and protesters at Occupy Vancouver, some of the protest's organizers met late Tuesday night with the B.C. Federation of Labour to discuss ways forward – without authorization from the encampment.

After several police officers said they were bitten in Monday's fracas – and protesters saying they were pushed to the ground unprovoked when authorities moved in on an Indigenous "sacred fire" barrel – the group of ex-organizers is expected to announce this morning that it is hoping to hit the restart button on a protest they say has gone awry – and are willing to open up negotiations with Mayor Gregor Robertson. But all have said they oppose police shutting down the camp.

Six protesters met late Tuesday at the request of B.C. Federation of Labour president Jim Sinclair, Occupy Vancouver's Lauren Gill revealed to the Vancouver Observer. Gill and two other Occupy activists were allowed to observe the meeting but said she does not support negotiating with the city or ending the encampment. Initially, Gill said, the meeting was to include City Manager Penny Ballem, but she was later asked not to attend. The B.C. Federation of Labour has given thousands of dollars in donations to Occupy Vancouver, and reportedly expressed concern that the movement remain non-violent.

But an ex-Occupier attending a later meeting told the Vancouver Observer the movement needed to open up dialogue with the city.

“I honestly think the movement has been hijacked and we need backup plans,” said meeting participant Min Reyes, a student who helped plan the original October 15 march, which established the tent city. “Everybody is looking at Occupy Vancouver now -- even Fox News (in the U.S.), basically trying to discredit Occupy Wall Street based on what is happening in Vancouver. That's not right.”

Things at the camp heated up – literally – last night when firefighters pushed their way through a crowd gathered around a “sacred fire” barrel lit by several Indigenous members of the movement, who said they had the right to hold traditional ceremonies on public land.

But the fire department, which has been monitoring the camp closely after several drug overdoses and fears of a fire hazard this week, immediately extinguished the barrel, which was surrounded by at least three metres of concrete. Another fire was lit Tuesday afternoon, with no incident reported with authorities -- in fact, Gill said that the fire department "negotiated with Native elders and they agreed to oversee the sacred fire" on Tuesday -- meaning it could continue to burn.

“The sacred fire means a lot to us,” said Telquaa, from the Wet’suwet’en nation in northwest B.C., on Monday night after she helped light the fire. “Tonight they took our fire out -- there is no religious freedom for us as Indigenous people.”

“That's basically like cutting our church off, that's just what they did. This has really opened old wounds for the ancestors, but it will open a lot of new wounds for a lot of people around the world who watch this go on.”

One witness alleged that a firefighter on site, whom he identified as Dan Wilson, actually approved Monday's fire barrel and supervised its lighting before officers moved to put it out.

"At about 4:30 (p.m.) I encountered this officer detailing exactly what needed to happen for the fire to meet his approval and be safe to a native elder," said blogger Eric Doherty on Vancouver Media Co-op.

But Reyes said that regardless of the purpose of the fire, she believes some people at the art gallery site used the fire in order to provoke authorities into a conflict.

“It was staged to create conflict,” she said. “People just missed the whole essence of the movement.”

“It's time to start questioning people who are acting against the will of the (Occupy Vancouver) General Assembly (GA). The GA has a consensus that open flames aren't acceptable.”

Reyes said her faction of ex-organizers has been cautious about circumventing the encampment's consensus process, but felt “pushed out” of the movement. Several weeks ago, Reyes – who describes herself on Twitter as a socialist with anarchist leanings – withdrew from the movement after she says the General Assembly blocked a camp code of conduct she had proposed, which she hoped would prevent unapproved actions such as the heckling of the mayors' debate last night.

“It might not all sound inclusive,” she admitted. “But the movement now excludes the public from safely participating in discussion. If those people at the art gallery think they're the 99 per cent, they're mistaken.”

However, Reyes said that she opposes police raiding the three-week old encampment, especially when some are reaching out an olive branch. And while she and others admit they do not have authority within Occupy Vancouver to negotiate an end to the camp, she hopes her group can at least push the city to find housing for those homeless at the camp. Gill, however, said that housing had already been offered by Vancouver's housing advocate Judy Graves, but that homeless at Occupy rejected the offers because of "horrible conditions" in the single resident occupancy (SRO) suites being offered.

Ultimately, Reyes said would like to restart the movement in Vancouver as “flash occupations” -- five hour takeovers of “strategic targets” in the financial and political sector, which could disperse before arrests could be made. But she rejects the city's moves towards bringing police in, with a court ruling on an injunction starting at 10 a.m. today. Meanwhile, David Eby, lawyer and president of the B.C. Civil Liberties Association, published a document on his personal blog outlining his views on the protesters' legal rights.

“The mayor should be addressing us,” Reyes said. “Evicting us by force should be the last measure -- and there still no justification for that.”

“If he wants to evict us he needs to provide an alternative mechanism. The physical occupation is the physical expression of our political frustration. It's time to talk about possible solutions.”

She said she is organizing a protest in solidarity with the worldwide Occupy movement on Sunday, but details have not yet been announced. She indicated it would not begin at the Vancouver Art Gallery -- aiming to keep itself separate from the tent city, although she said the march would pass the original encampment.