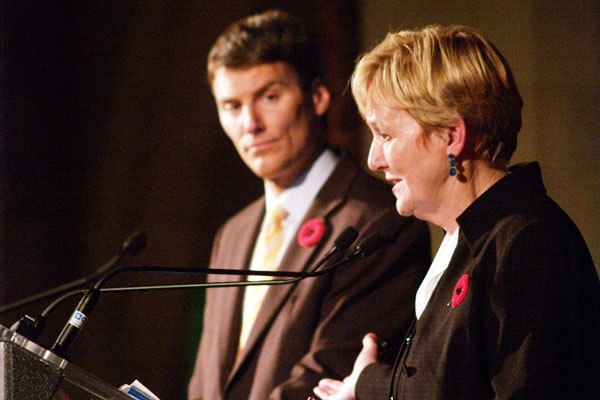 2011 Vancouver Municipal Election: Before Monday night’s mayoral debate even began, the sign-bearing Occupy Vancouver supporters packed into St. Andrew’s-Wesley United Church made it clear that the approaching discussion wasn’t going to be an easy one.

After a series of protesters’ “mic checks” and a long-winded introduction from Reverend Gary Paterson (thanking Coast Salish nations for the use of their lands), conversation turned to the matter at hand. Mayor Gregor Robertson and his NPA challenger, Suzanne Anton were each given five minutes to make their opening statements, amidst shouts of “lies!” and other interruptions from the audience.

Anton first reiterated her disappointments with Robertson’s homelessness strategy, stating that the “heavy lifting” to reduce it was done by the previous NPA council and describing how he “grabbed onto a speeding train when he made homelessness his issue” in the last election.

Robertson’s introduction listed his party’s accomplishments as well as their new promises, expressing hope for ending street homelessness in the years to come.

“There’s a whole bunch of ideas that we want to implement over these next three years, but we need the whole community’s support to do this,” said Robertson. “We’ve had extraordinary partnerships for three years, and we made a really solid dent in [homelessness].”

After hearing several of the candidates’ responses, Bula earned a few giggles with her comment that they appeared to “agree on everything”.

Of course, that sentiment didn’t last very long. Anton was quick to criticize Vision’s focus on providing shelters as opposed to longer-term housing solutions, while Robertson emphasized that the short-term goal was to keep roofs over heads as they wait for new facilities.

“Stop thinking and start acting,” came the response from the crowd.

In attendance – and on the “human microphone” – were two prominent Occupy Vancouver campers running in the election, city council hopeful Lauren Gill and independent mayoral candidate Darrell Zimmerman. Both were recognized and thanked for their attendance, but Zimmerman voiced his resentment for not having been invited to speak officially.

As the panelists went on with their questions, Robertson and Anton held their tongues despite repeated interruptions. On multiple occasions, Reverend Paterson was forced to return to the stage, using delicate words and even a short hymn to calm the crowd and get the participants back on track.

However, as the hecklers in the audience pointed out, many of the candidates’ responses failed to provide the answers citizens were looking for. In many cases the candidates responded with agreement – yes, it’s a problem, and we’ll make it a priority. But when it came to specific solutions and plans for action, many of their responses seemed to come up short.

One question addressed the controversial Olympic Athletes Village, originally intended to offer one third of its units for social housing.

“The social housing in the Olympic Village has been cut back to almost nothing,” Anton replied, blaming Vision council for the current state of affairs.

“For your $110 million there are about 100 people living in low-income housing in the Olympic Village. It’s not a very good deal for the city,” she said.

Without denying the lack of low-income units, Robertson claimed it was the former NPA council who was responsible for the Village’s shift to 80 per cent market housing. He called it a “ghastly mistake made by an inexperienced council”, stating that Vision Vancouver was left to pick up the pieces and make the project a reality.